The Renault UE Chenillette was a light tracked armoured carrier and prime mover produced by France between 1932 and 1940.

In 1930 the French Infantry decided to develop a light armoured vehicle able to tow and supply small cannon and mortars. In 1931 the Renault company was given the contract for production of its Renault UE, combined with the Renault UK trailer. In 1937, from a number of competitors, the Renault UE2 was chosen as an improved type for large-scale production. Of both types combined over five thousand were built, including licence production in Romania, and they were part of the standard equipment of all French infantry divisions. Most Renault UE vehicles in French service were unarmed; those in 1940 captured by Germany were used for a variety of purposes, including being armed with machine-guns, antitank-guns and rocket artillery.

The Chenillette ("small tracked vehicle") or tracteur blindé ("armoured tractor") as Renault preferred to call it, is indeed a very small vehicle: just 280 centimetres long, 174 cm wide and having its highest point at 125 cm; the roof is only 103 cm high. Its cargo carrying capacity is rather limited. There is a rectangular armoured bin at the back, 145 cm long (its length corresponds to the width of the vehicle as a whole), 60 cm wide and 36 cm high, able to hold a load of about 350 kg (lower than the original specification of 500 kg); unloading is made easier by the possibility to tilt the bin; the back plate then hinges downwards, forming a slope on which cargo can slide to the ground. The main cargo is carried by the tracked trailer, a close copy of the British type, with a length of its bin of again 145 cm, a width of 110 cm and a height of 35 cm; weighing itself 775 kg, it can hold a load of about 600 kg — whereas the specification had asked for only 400 kg. The tracks can be removed for road transport; there are two road wheels per side.

The bin forms the back compartment of the vehicle; the larger front compartment is for the crew and engine. The four-cylinder 38 hp engine is positioned in the centre, with the driver to its left and the commander to its right. The gear box (six speeds forward, two reverse), differential and transmission are placed in front of the engine. These mechanical parts are placed under two projections on the otherwise very steeply sloped armour of the glacis; these can be retracted for maintenance of the mechanical parts. Each crew member, sitting below a hatch that is the only way of entrance or exit, has a fuel tank behind its seat, together having a total capacity of 56 litres, allowing for a range of a hundred kilometres. The exhaust pipe runs in front of the commander to the right ending in a silencer on the right side of the vehicle; in later production vehicles an armoured cover was added; as it tended to overheat a later variant of this cover had cooling slits.

To reduce the height of the vehicle it has been made impossible for the crew members to retract their heads under the roof. To protect these vital parts two hemispherical armoured hoods (calottes) have been fitted. These have vision slits but to improve the field of vision the front section of these hoods can like a visor be pivoted backwards over the back section. As otherwise a bar between the roof and the glacis would have hindered entrance, the forward hinging glacis hatches have an extension forming the roof section that fits around the front part of the hood; if the hood is retracted and the hatch opened, a larger entry space is thus available. An interesting feature of the vehicle is the internal communication system used. When the hoods are closed, the two crewmen, separated by the engine between them, cannot directly communicate; neither internal nor external radio communications are possible, as there are simply no radio sets fitted. 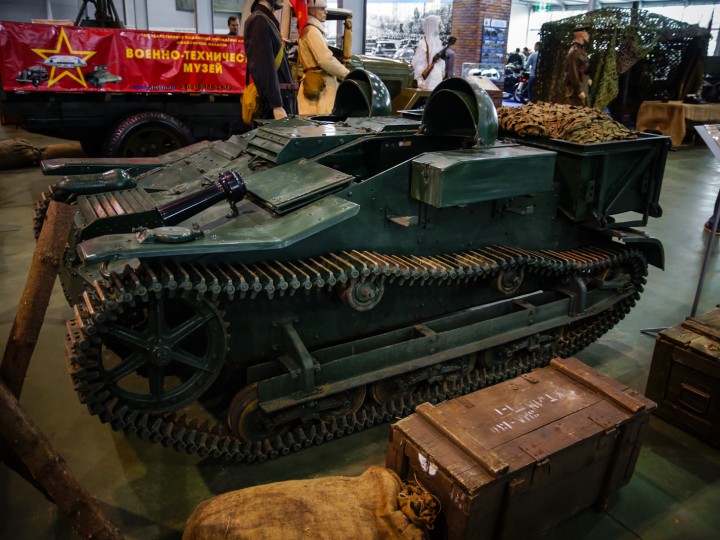 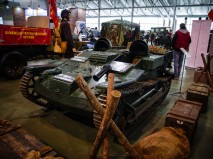 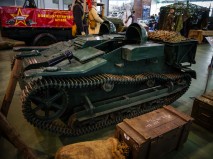 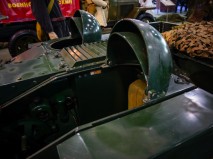 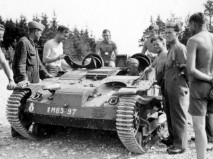 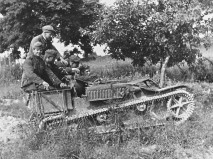 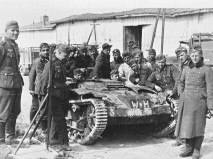 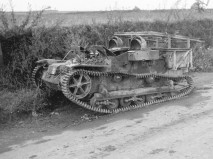