The Daimler Reitwagen ("riding wagon") or Einspur ("single track") was a motor vehicle made by Gottlieb Daimler and Wilhelm Maybach in 1885, and is widely recognized as the first motorcycle. Daimler is often called "the father of the motorcycle" for this invention. Even when the three steam powered two wheelers that preceded the Reitwagen, the Michaux-Perreaux and Roper of 1867–1869, and the 1884 Copeland, are considered motorcycles, it remains nonetheless the first gasoline internal combustion motorcycle, and the forerunner of all vehicles, land, sea and air, that use its overwhelmingly popular engine type.

It had a 264-cubic-centimetre (16.1 cu in) single-cylinder Otto cycle four-stroke engine mounted on rubber blocks, with two iron tread wooden wheels and a pair of spring-loaded outrigger wheels to help it remain upright. Its engine output of 0.5 horsepower (0.37 kW) at 600 rpm gave it a speed of about 7 miles per hour (11 km/h). Daimler's 17-year-old son, Paul, rode it first on November 18, 1885, going 5–12 kilometres (3.1–7.5 mi), from Cannstatt to Untertürkheim in Stuttgart, Germany. The seat caught fire on that excursion, the engine's hot tube ignition being located directly underneath. Over the winter of 1885–1886 the belt drive was upgraded to a two-stage, two-speed transmission with a belt primary drive and the final drive using a ring gear on the back wheel. By 1886 the Reitwagen had served its purpose and was abandoned in favor of further development on four wheeled vehicles.

The original Reitwagen was destroyed in the Cannstatt Fire that razed the Daimler-Motoren-Gesellschaft Seelberg-Cannstatt plant in 1903, but several replicas exist in collections at the Mercedes-Benz Museum in Stuttgart, theDeutsches Museum in Munich, the Honda Collection Hall at the Twin Ring Motegi facility in Japan, the AMA Motorcycle Hall of Fame in Ohio, and in Melbourne, Australia. 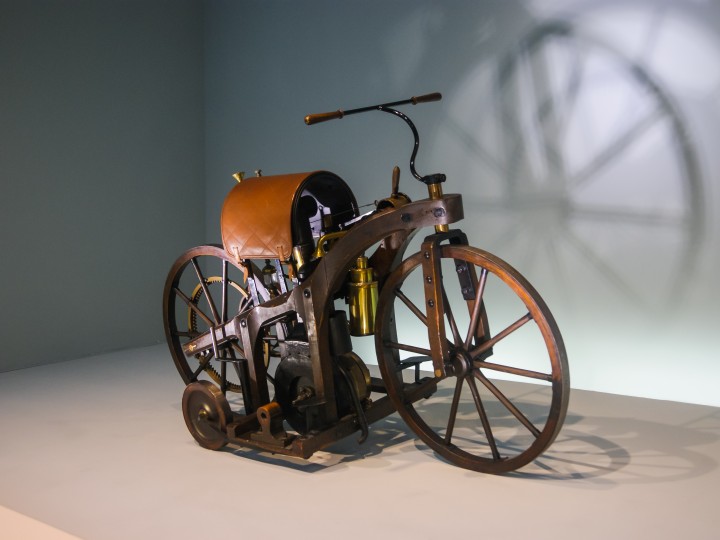 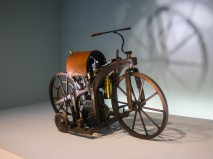 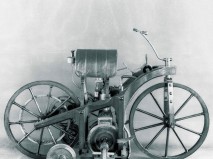 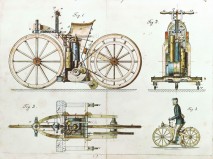 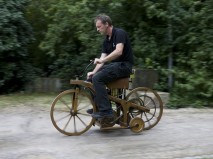 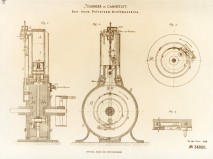