The Benz Patent-Motorwagen (or motorcar), built in 1886, is widely regarded as the first automobile; that is, a vehicle designed to be propelled by an internal combustion engine. The original cost of the vehicle in 1885 was $1,000.

The vehicle was awarded the German patent, number 37435, for which Karl Benz applied on January 29, 1886. Following official procedures, the date of the application became the patent date for the invention once the patent was granted, which occurred in November of that year.

Although Benz's wife, Bertha, financed the development process, and would hold patent rights under modern law, as a married woman she was not allowed to apply for the patent. Benz officially unveiled his invention to the public on July 3, 1886, on the Ringstrasse (Ringstraße) in Mannheim. About 25 Patent Motorwagens were built between 1886 and 1893.

The first Motorwagen used the Benz 954 cc single-cylinder four-stroke engine with trembler coil ignition. This new engine produced 2⁄3 horsepower (0.50 kW) at 250 rpm in the Patent-Motorwagen, although later tests by the University of Mannheim showed it to be capable of 0.9 hp (0.67 kW) at 400 rpm. It was an extremely light engine for the time, weighing about 100 kg (220 lb). Although its open crankcase and drip oiling system would be alien to a modern mechanic, its use of a pushrod-operated poppet valve for exhaust would be quite familiar. A large horizontal flywheel stabilized the single-cylinder engine's power output. An evaporative carburettor was controlled by a sleeve valve to regulate power and engine speed. The first model of the Motorwagen had not been built with a carburetor, rather a basin of fuel soaked fibers that supplied fuel to the cylinder by evaporation. Benz later made more models of the Motorwagen, model number 2 boasting 1.5 hp (1.1 kW), and model number 3 with 2 hp (1.5 kW), allowing the vehicle to reach a maximum speed of approximately 10 mph (16 km/h). The chassis was improved in 1887 with the introduction of wooden-spoke wheels, a fuel tank, and a manual leather shoe brake on the rear wheels. 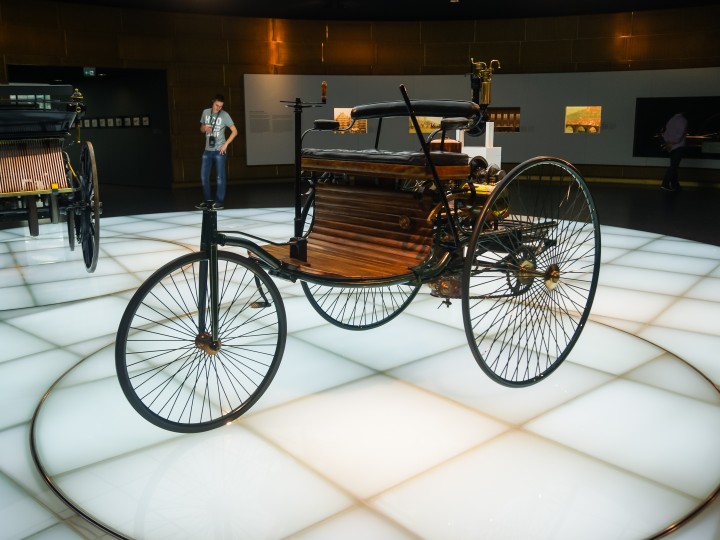 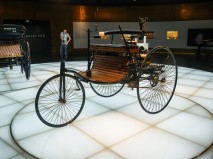 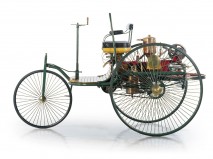 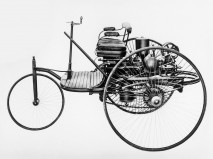 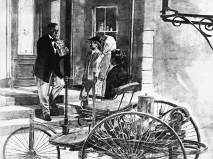 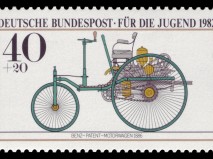