The Harley-Davidson WLA is a Harley-Davidson motorcycle that was produced to US Army specifications in the years during and around World War II. It was based on an existing civilian model, the WL, and is of the 45 solo type, so called due to its 45-cubic-inch (740 cm3) engine displacement and single-rider design. The same engine, in a slightly lower state of tune, also powered the three-wheeled Servi-Car (the "G" family), leading to the "solo" distinction.

The model number breaks down as follows:
• W : the W family of motorcycles. Harley Davidson (except in very early models) gives a letter designation for each model family. The W series at the time was the newest incarnation of the 45-cubic-inch (740 cm3) flatheadmotor, and was developed from the earlier R family 1932–1936.
• L : "high compression", in the usual HD scheme. The "low compression" W model was only briefly available.
• A : Army. The company would also produce a model to the slightly different specifications of the Canadian Army, which would be named the WLC. The WLCs differed from WLAs chiefly in the use of some heavier components, usually Big Twin parts, as well as Canadian blackout lighting.

Harley-Davidson began producing the WLA in small numbers in 1940, as part of a general military expansion. The later entry of the United States into World War II saw significantly increased production, with over 90,000 being produced during the war (along with spare parts the equivalent of many more). Harley Davidson would also produce a close WLA variant for the Canadian Army called the WLC and would also supply smaller numbers to the UK, South Africa, and other allies, as well as filling orders for different models from the Navy and Marine Corps. Many WLAs would be shipped to allies under the Lend-Lease program. The largest recipient was the Soviet Union, which was sold over 30,000 WLAs.

The WLA is very similar to civilian models, specifically the WL. Among the changes making it a military model:
• paint and other finishes: painted surfaces were generally painted olive drab or black and chrome- or nickel-plated parts were generally blued or parkerized or painted white. Some parts were left as unfinished aluminum. However, Harley Davidson was apparently very practical in its use of existing parts and processes, and many finishes remained in their bright civilian versions for a time, and, in some cases, for the whole production run.
• blackout lights: in order to reduce nighttime visibility, WLAs were fitted with a second set of blackout head and tail lights.
• fenders: to reduce mud clogging, the sides of the standard fenders were removed.
• accessories: a heavy-duty luggage rack (for radios), ammo box, leather Thompson submachine gun scabbard, skid plate, leg protectors, and windshield could be fitted. Most came with at least these accessories less the windshield or leg protectors.
• air cleaner: an oil bath air cleaner, originally used for tractors and other vehicles in dusty environments, was fitted to handle the dust of off-road use and to allow easier field maintenance. Oil bath cleaners require only the addition of standard motor oil rather than replaceable filters.
• fording: changes to the crankcase breather reduced the possibility of water intake into the crankcase. 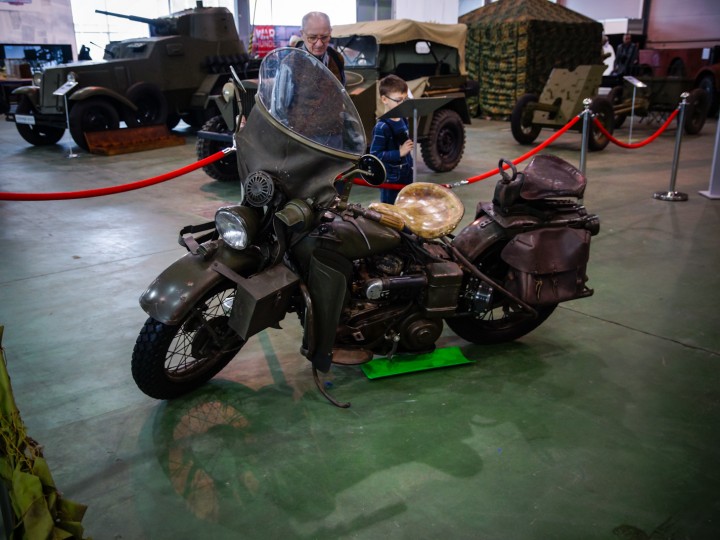 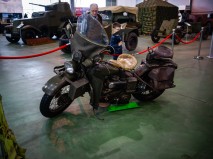 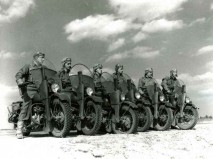 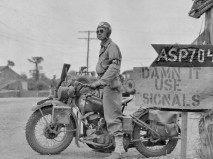 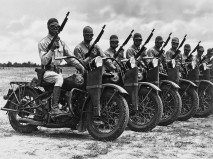 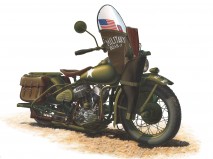