AWZ P70, subsequently Sachsenring P70, also Zwickau is a car manufactured in the GDR entering the production association IFA as a national enterprise Automobilwerk Zwickau (AWZ) from 1955 to 1959. It was a predecessor of the cult "Trabant", one of the first mass-produced cars with a body made of plastics.
The P70 was created as a replacement for the outdated IFA F8 – a version of the pre-war DKW F8, differing mainly in use for covering the body shell of not plywood with leather substitute or metal, but of duroplastic - a composite material based on phenol-formaldehyde resin and cotton fibers, the use of which was a witty way to deal with the current shortage of rolled steel in postwar East Germany.
The chassis remained almost unchanged: like the F8, the car was built around a fusiform frame with suspensions by cross springs - front independent and rear dependent and mechanical brakes, which posed a frank anachronism for the mid-fifties. The P70 engine repeated the F8 in general terms, preserving the unique at the time for vehicles IFA layout with transverse engine mounting and front-wheel drive, but it was turned through 180 degrees - while the engine was in front of the axis of the front wheels, outside the wheelbase, which allowed improve the layout of the passenger compartment.
The water-cooled engine received an aluminum cylinder head and began to develop some more power, the voltage on-board electrical network was increased from 6 to 12 V. The transmission - multi-plate wet clutch and a three-stage gearbox was located between the engine and the main gear.
The drive was on the front wheels. An extremely unusual feature – the shift rod went right through the radiator cooling system for arrangement reason. The choice of gears was performed using the lever passing through the dashboard.
The body was designed completely from scratch, although it retained the characteristic design of its predecessor - a wooden frame with a plastic covering. Only the shield of the front, mud flaps of the engine compartment and the arches of the rear wheels, as well as reinforcing plates to the frame were made of metal.
The floor was plywood with special wooden strengthening, the pillars and the roof frame were made of solid beech. All add-on parts were made of duroplastic, even the bumpers were plastic – it is one of the first in the world cases of this material use for them. The rigidity of the body was provided by the frame, the body almost did not participate in the perception of loadings. The official premiere of the car took place at the Leipzig Fair in October 1955, and the international debut - at the Brussels Motor Show in January 1956. The introduction of the new model into production proceeded quite painfully because there still was a shortage of materials, but it was made in a timely manner.

Since the spring of 1957 a small series of sports coupe (hardtop) P70 Coupé, without B-pillar and with fully retractable side windows was produced. Despite a common platform and a similar appearance, compared to the base sedan, it was much more complicated car, having completely an original body.
Unlike the sedan and "combi", its body was made almost entirely by hand and had a metal outer skin, except for the plastic front fenders and hood, unified with the base model, as well as a sharp decrease in the number of wooden parts in the frame. In particular, the design of the doors and doorways completely changed, which made possible to install a lifting glass in the door.
The facing of the coupe’s front was redesigned, with a checkered radiator grille and the interior had a luxurious finish of natural leather. Most of these cars were of two-tone color, which was fashionable at that time.
Despite the sporty appearance, the engine for this car was set the same as that of the basic model, so that the dynamic properties of the coupe were even worse compared to it because of the greater mass of the body. There were issued a few cars, its cost was 1,700 marks. About 1,500 Coupe Trabant P70 were produced. Currently, P70, especially coupe are a highly coveted rarity in Germany. 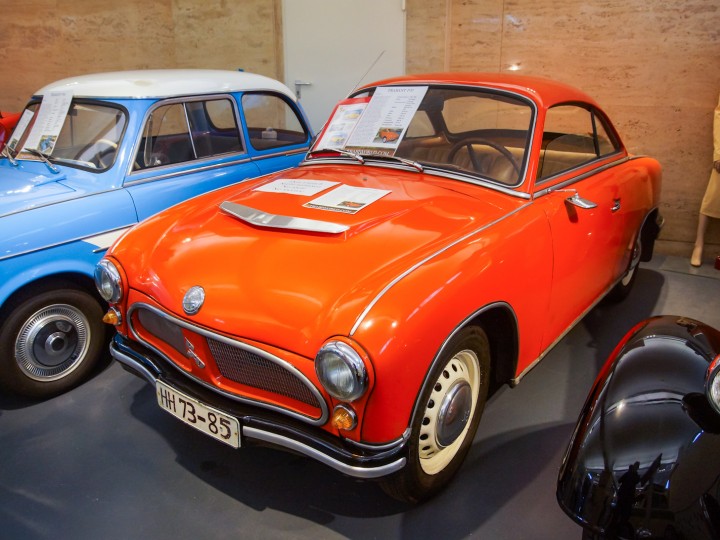 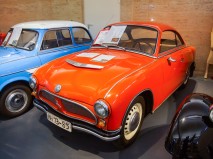 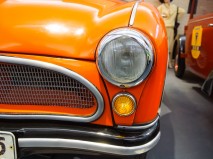 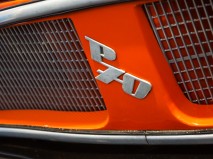 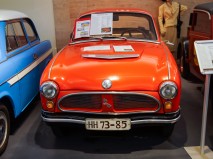 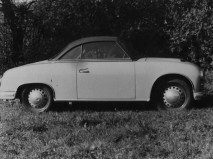 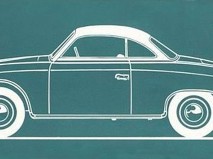 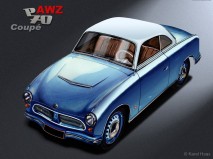 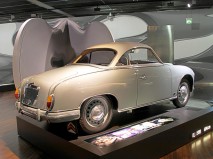 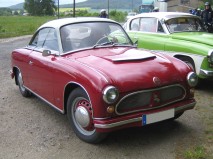