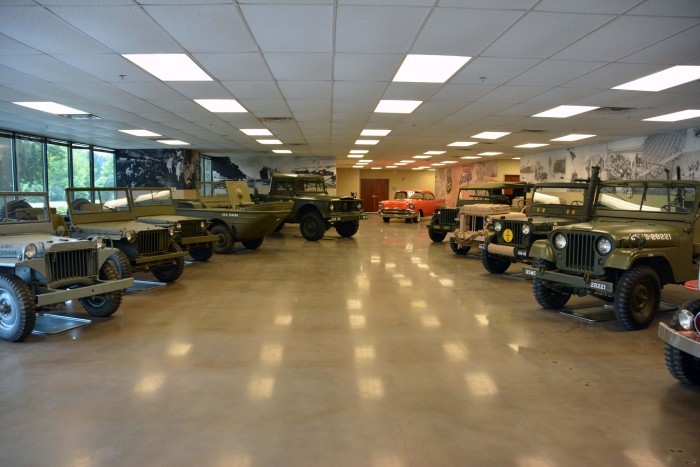 Tucked away in a nondescript business park in the suburbs of Atlanta, Georgia, sits one of the coolest private Jeep collections in the United States.

Owned by Jeep aftermarket parts supplier Omix-ADA, these Jeeps span the full gamut of the brand’s existence from the early military vehicle prototypes to ultra-rare late model examples. Some of these Jeeps, displayed at SEMA in 2014, have previously been covered by Hemmings, but traveling to Omix-ADA’s headquarters provided the perfect opportunity to check out the full collection.

Tucked away in a nondescript business park in the suburbs of Atlanta, Georgia, sits one of the coolest private Jeep collections in the United States.

Owned by Jeep aftermarket parts supplier Omix-ADA, these Jeeps span the full gamut of the brand’s existence from the early military vehicle prototypes to ultra-rare late model examples. Some of these Jeeps, displayed at SEMA in 2014, have previously been covered by Hemmings, but traveling to Omix-ADA’s headquarters provided the perfect opportunity to check out the full collection. 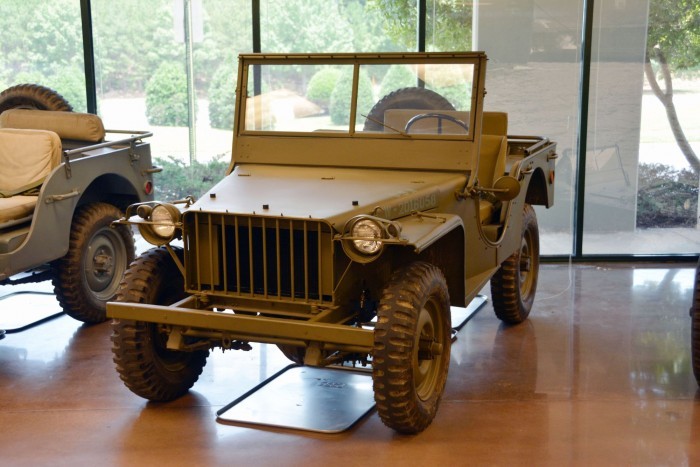 As a little background to how Jeep became Jeep: For the impending American involvement in World War II, the Army tasked various automakers with designing a lightweight four-wheel-drive truck. Of the proposals received, American Bantam was the only company to meet the strict guidelines, but as it was unable to meet the necessary production requirements for the Army, Ford and Willys-Overland were given Bantam’s designs, thus resulting in the Bantam BRC-40, Willys MA and Ford GP. 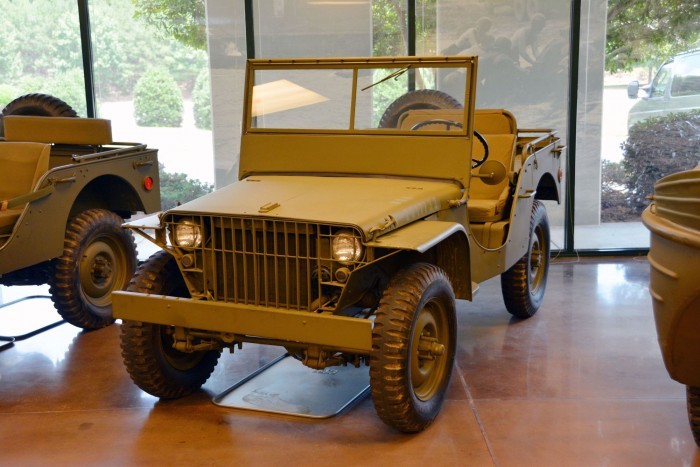 Of these three prototypes, it’s the 1941 Ford GP that most closely resembles the original “Jeep” we know today, with its rounded hood and recessed headlamps, but all three variants saw production (some limited) in the war years. Omix-ADA’s data reveals production numbers of 3,907 for the 1941 Ford GP, 2,605 for the 1941 Bantam BRC-40 and just 1,555 for the Willys MA. 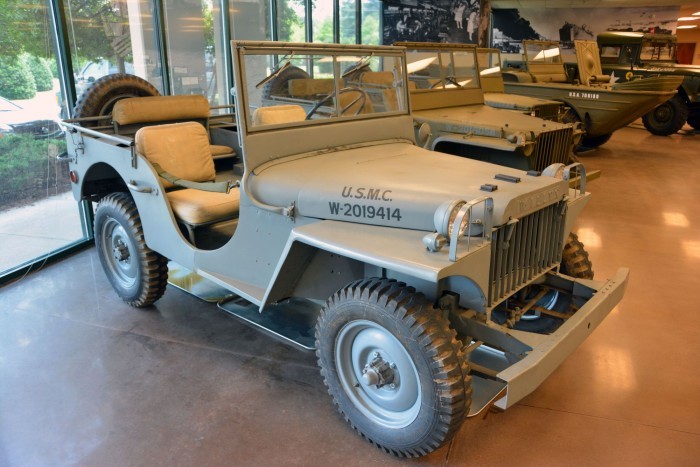 An interesting side note about this particular Willys MA—aside from being one of just 45 known examples to remain—is that it was initially sunk on a landing ship during the Battle of Saipan, and eventually recovered by the Navy, painted battleship gray and recommissioned for use on a naval supply ship. Adding even more provenance, it was also driven on the Rubicon Trail during the Jeepers Jamboree in 1953. This battle-tested, Rubicon-conquering Willys MA might be the most prototypical example of a Jeep ever made. 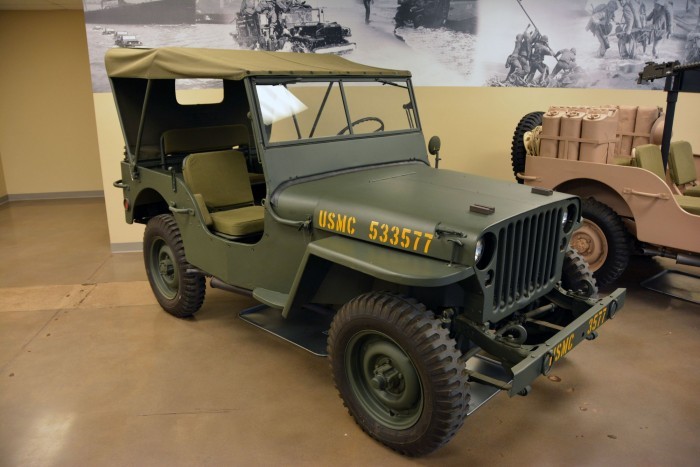 Eventually, the Army standardized the design for its light reconnaissance vehicle, leading to the Willys MB and Ford GPW, examples of which Omix-ADA also has in its collection. Although “found in crate” Jeeps are largely an urban legend, Omix-ADA has the next best thing—a Willys MB built entirely from aftermarket reproduction parts. Building such a vehicle would likely be more expensive than finding one already restored, but far more entertaining. 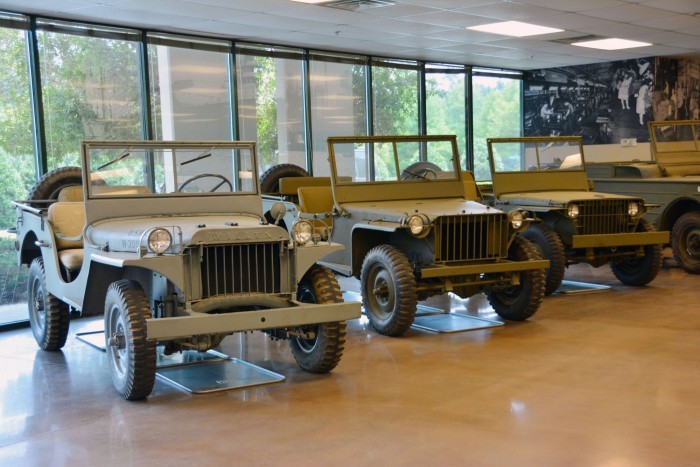 Willys, Bantam and Ford models, side by side for comparison.

Seeing such flawless examples of the MB and GPW in close proximity allowed Dave to point out some identifiable design attributes that differentiated the two models. Though they may look identical to the untrained eye, the two versions of the military Jeeps are easily distinguishable by the front cross member (located at the base of the grille). On the Willys MB, this cross member was tubular, while Fords used a squared-off cross member. Early examples of both Jeeps had the logo of the respective automaker stamped into the rear sheetmetal. Since this was a war effort and not a marketing campaign, though, the Army put an end to this practice in the spring of 1942. 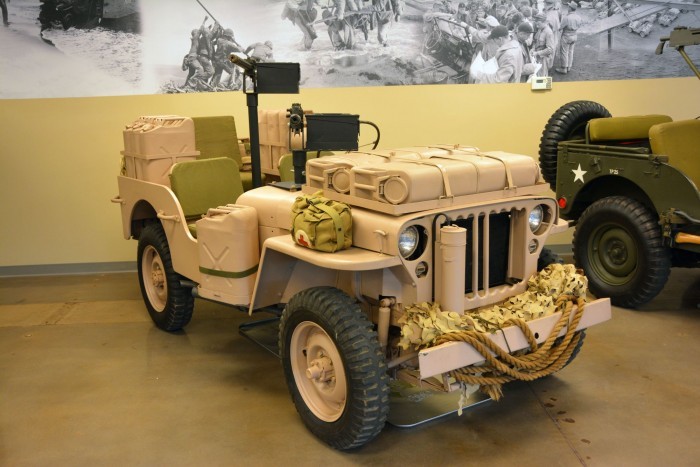 Proving that there are always lessons to be learned about Jeeps and WWII, I also got a brief history lesson about the British Special Air Services (SAS) and its campaign against enemy airfields located in North Africa. This regiment used specially outfitted Ford GPWs to attack airbases and destroy as many bombers as possible. The SAS GPW owned by Omix-ADA is a recreation, but it is accurate in its design. These Jeeps reduced weight as much as possible to carry gasoline, ammunition and water, and they were painted tan to blend into the surrounding desert. 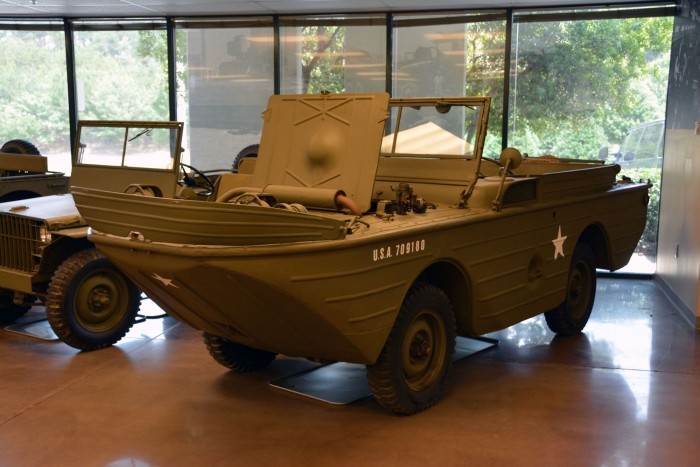 Another specialty version of the was created to tackle a different element of nature. With plenty of water crossings in the European campaigns, the Ford GPA “Seep” added a boat-like body to the GPW’s chassis for an amphibious troop and cargo hauler. The Seep ended up not being very good on either land or water, and most were sent to Russia where shallow lakes and creeks were numerous. The GPA’s limitations ultimately led to a short production run, and the Seep was only built for 10 months from late 1942 to the middle of 1943. Most of the 12,778 Seeps were destroyed or sank during the war, but the 1943 Ford GPA owned by Omix-ADA is in excellent condition 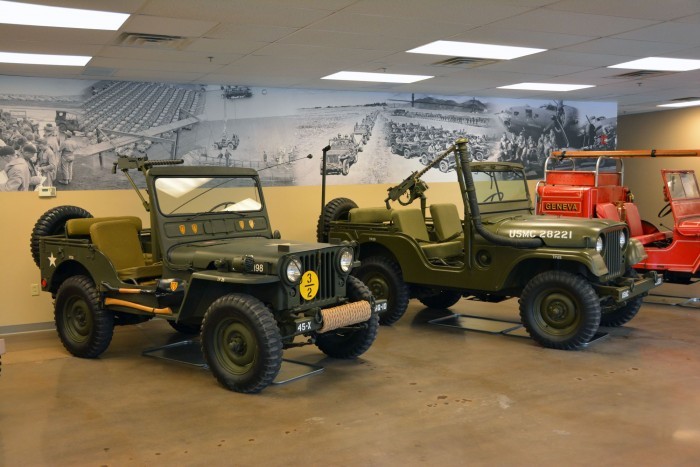 Coming out of World War II, the MB became successful as a civilian vehicle, thanks to the CJ-2A, so a more beefed-up version called the CJ-3A was created. In 1950, the CJ-3A (with its quarter-ton payload capability) was developed as an MB replacement called the M38, which was deployed during America’s next military conflict, the Korean War. The early M38 wasn’t that big of a departure from the MB, but the 1952 M38-A1 marked a significant design change for Willys and went on to inspire the first non-flat-fendered Jeep, the CJ-5. 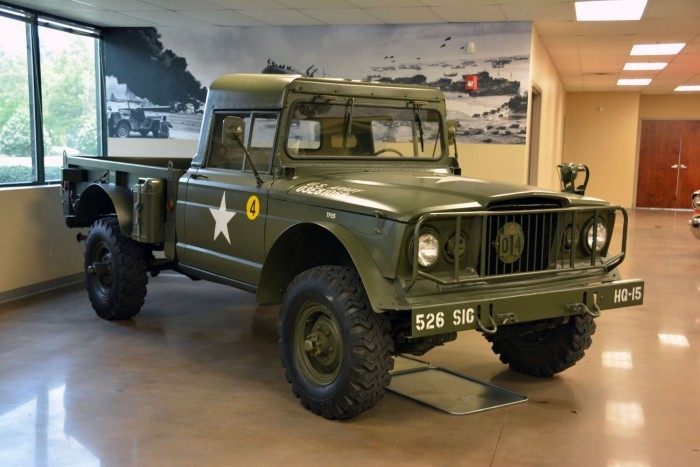 Finally, the 1967 Jeep M715 rounds out Omix-ADA’s collection of military Jeeps. Like the Willys M38-A1, the Jeep M715 was inspired by a civilian model—in this case, the Jeep Gladiator pickup truck—rather than the other way around. These trucks were used in the Vietnam War, but production only lasted three years before being replaced by the Dodge Ram-based M880. Unlike the Gladiator, the M715 had a folding windshield similar to its smaller counterparts.

While Toledo, Moab and Auburn Hills might be meccas for Jeep owners and enthusiasts, Omix-ADA’s collection of Jeeps is a must see… especially if you aren’t able to make it to SEMA. Currently, the collection stands at 26 Jeeps—and a ’57 Bel Air—and there is even a separate room housing an assortment of Jeeps and war memorabilia. As a company making its living selling parts for customers to build custom Jeeps, it is commendable that Omix-ADA has such a collection to preserve and celebrate Jeep’s history.

And here are some more interesting exhibits from this collection: 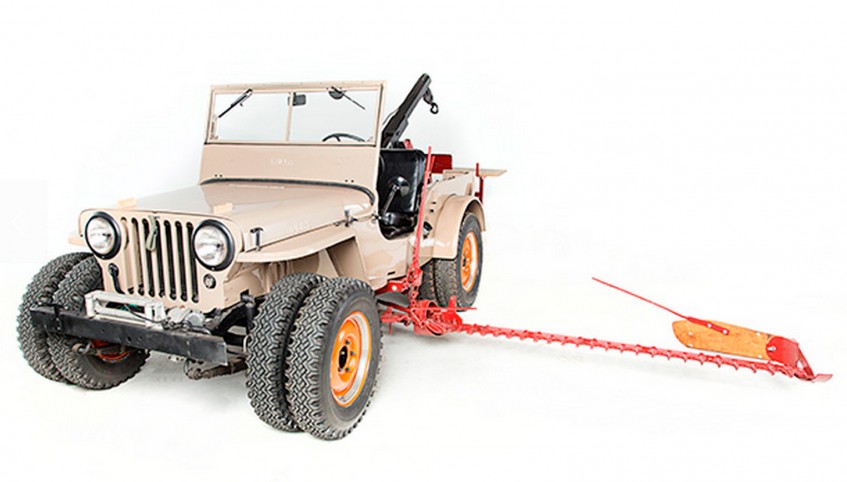 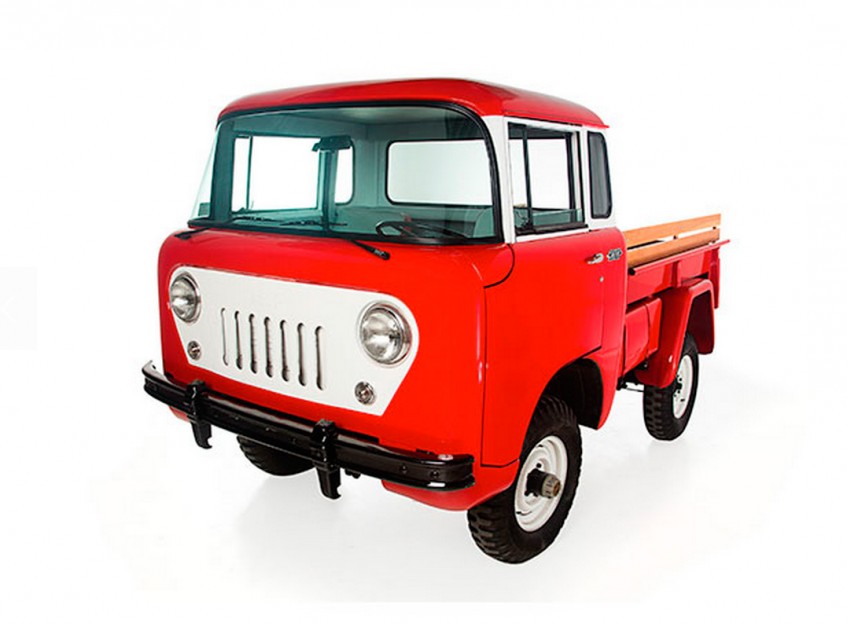 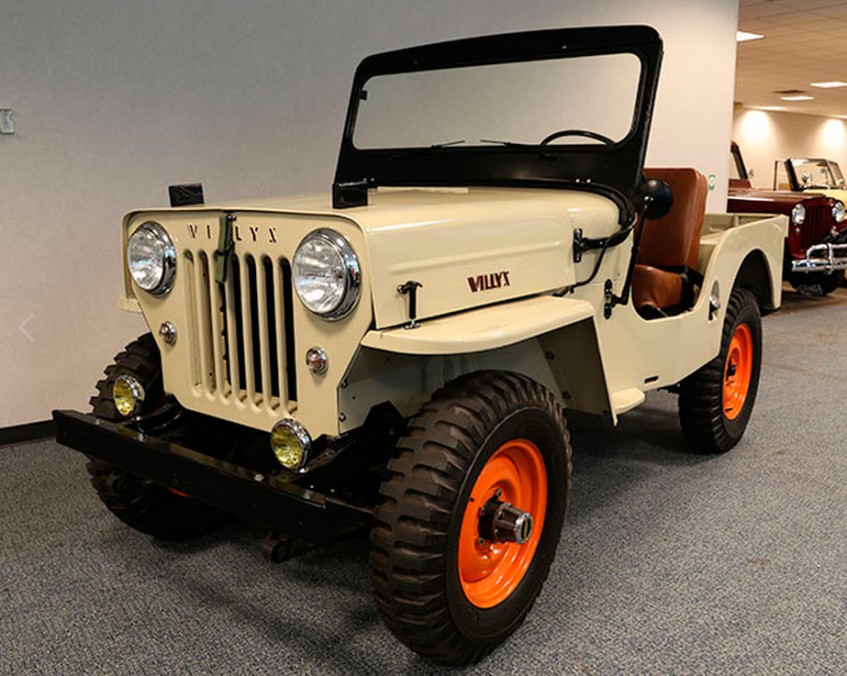 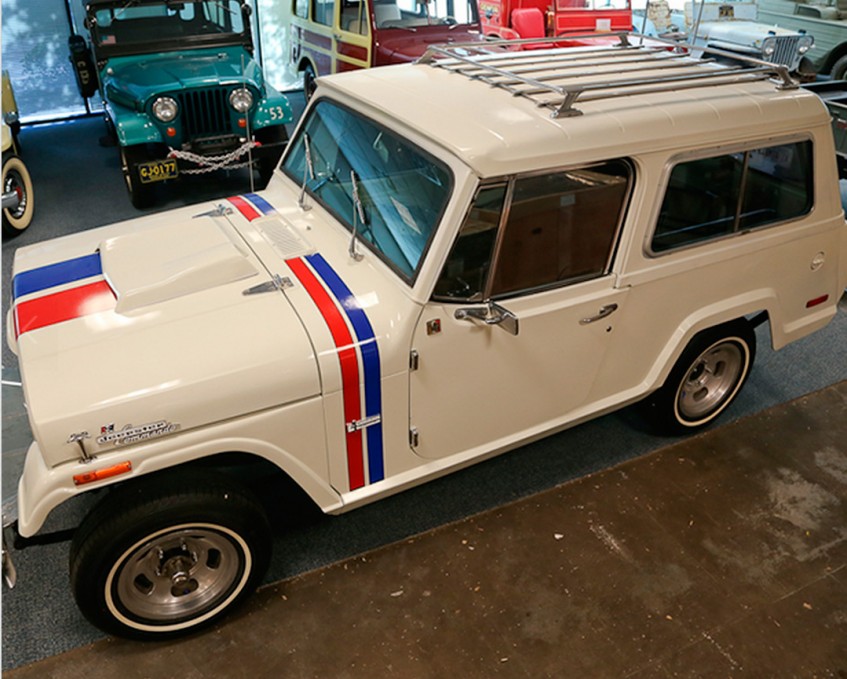 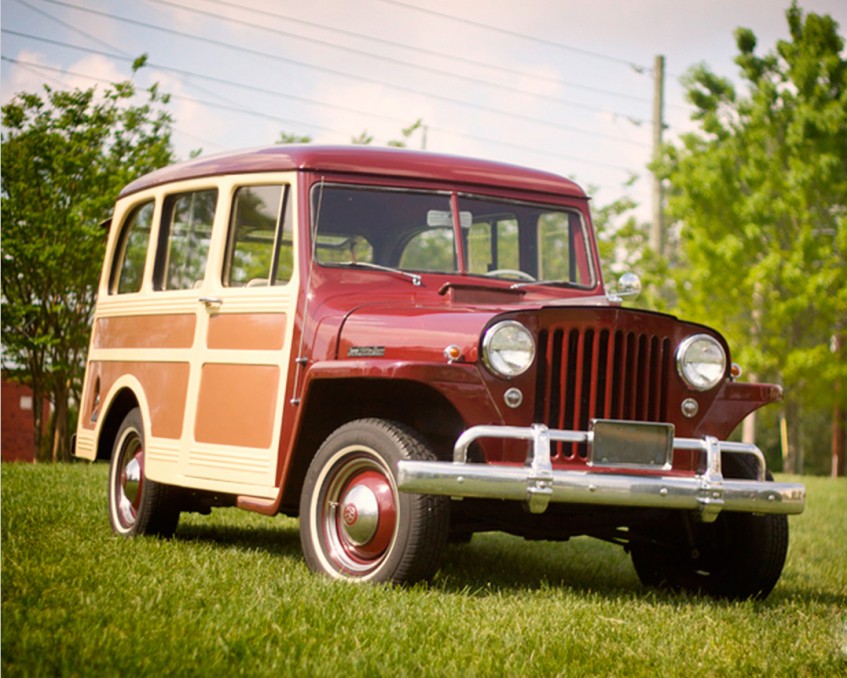 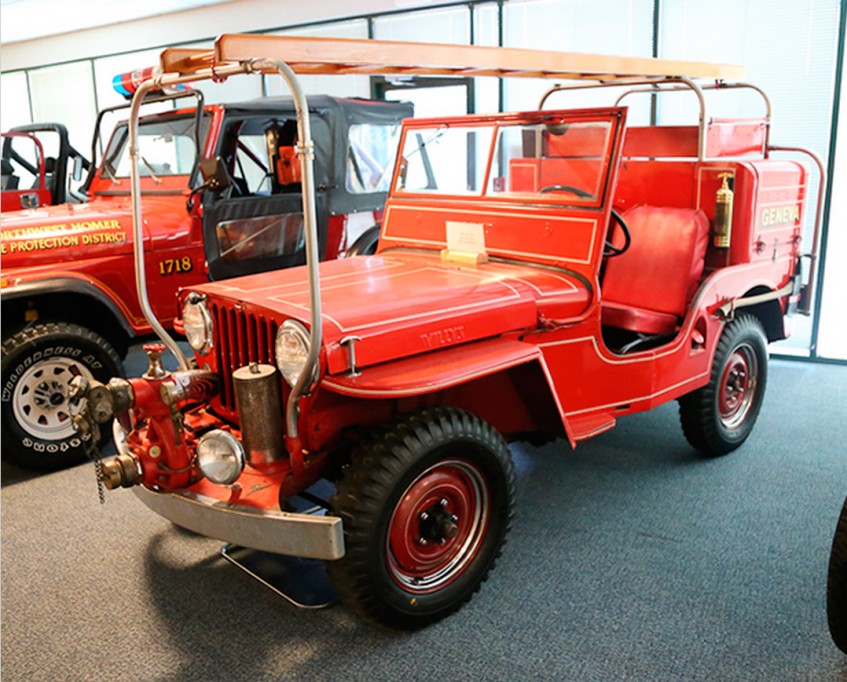 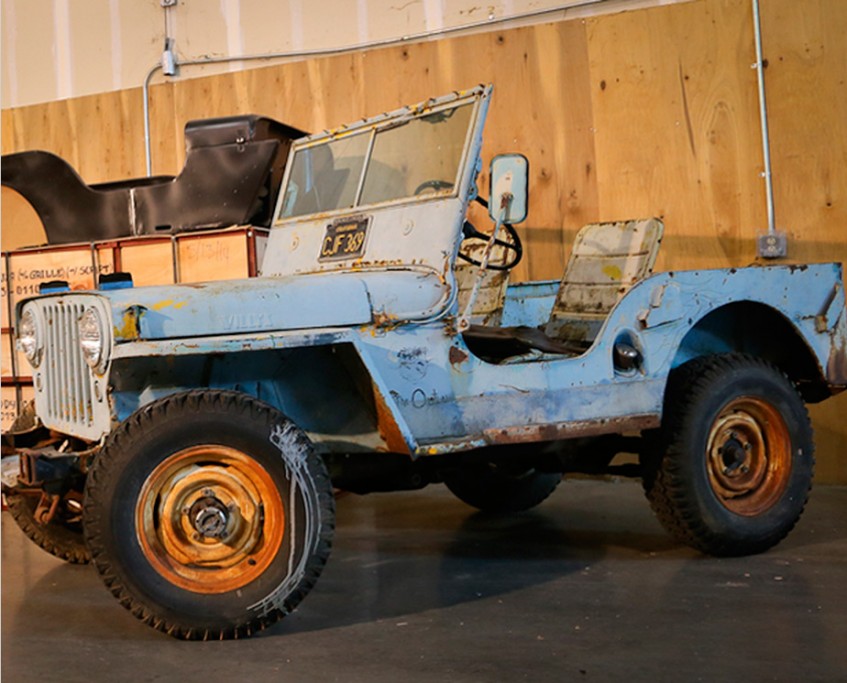