The Collection of Antiquarian Cars of the Prince of Monaco

360carmuseum.com
It is one of the most picturesque places, where a collection of masterpieces can be housed, to be more exact, of "car masterpieces"!
This miraculous museum (as the Principality of Monaco itself) is located on the ground with a view of Terrasses de Fontvieille at the bottom of the mountain Rocher , where the palace of the Prince of Monaco is situated.
You can see such stunning all-around view in front of the entrance to the Museum. 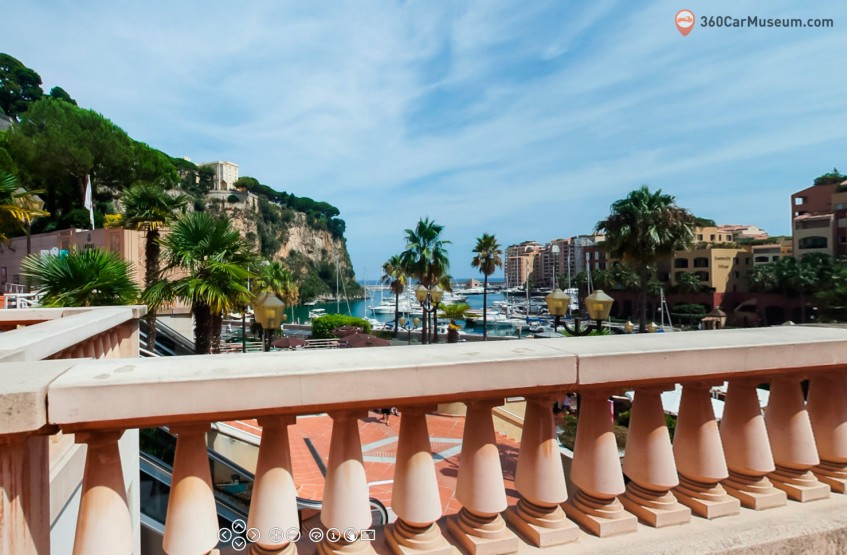 However, let’s look up from the fascinating scenery, turn round and enter the museum.
By the way this collection was prepared for more than 30 years by Prince Rainier III, who had a passion for cars, good cars throughout his life, which helped him (of course, not only the passion) create extraordinary private collection of historical automobiles. Many of them were built by the most famous European and American manufacturers, and everyone of them marked his time in his own way. 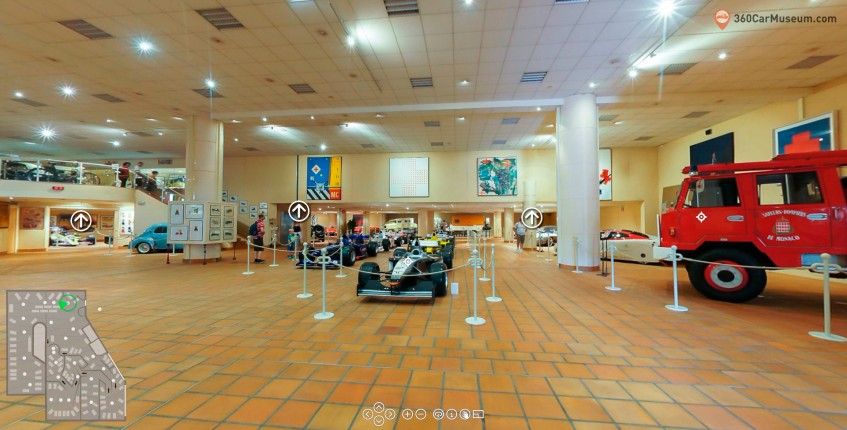 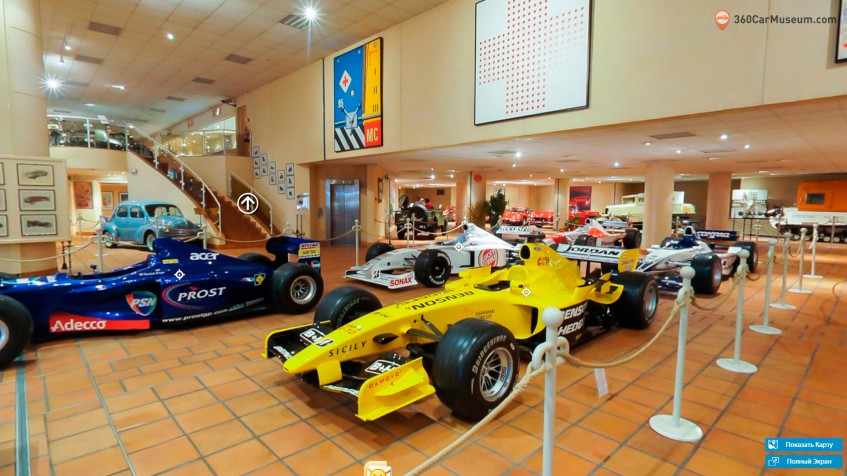 And to finish the topic of F1 in this museum we represent a race car of the team Lotus - Lotus E21 F1 2013, which stands not far from the entrance. It is quite young and keeps the subordination before its old and eminent predecessors. 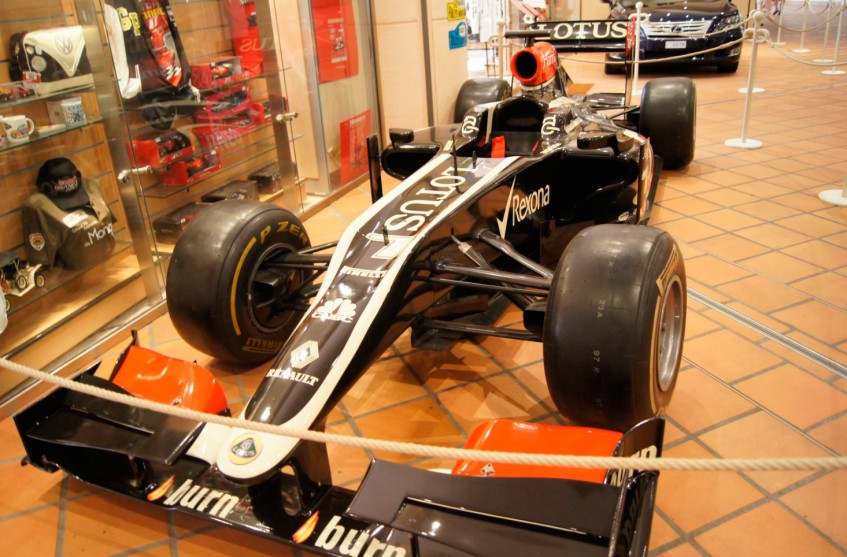 And more from the most interesting on the base floor of the museum: 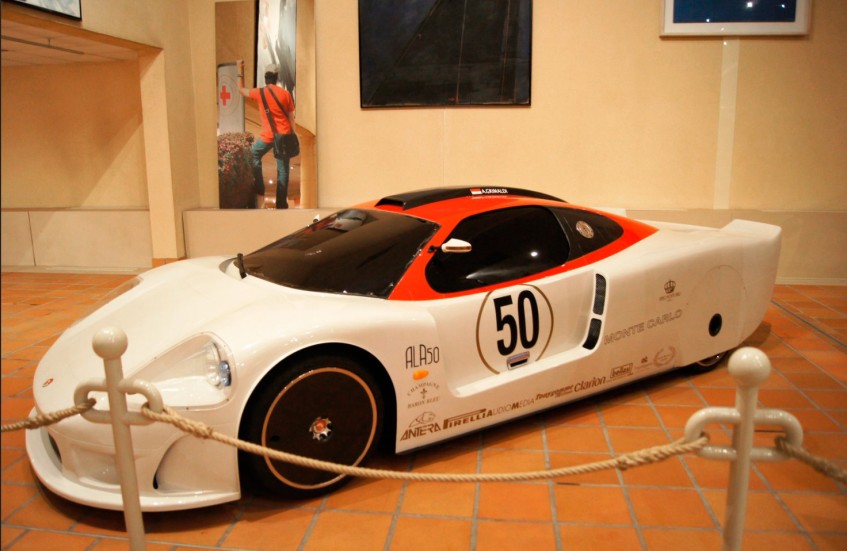 - Monte Carlo Automobile ALA50 2009.
The automobile was built in the honor of the 25th anniversary of the first Monaco brand car in the history. This “show car” ALA50 of Monte Carlo automobile company was presented to the Prince Albert II on his 50-th anniversary. It was made completely of carbon fiber, equipped with 650 hp V8 engine of 4,500cc, designed together with Christian Contzen, the former general director of Renault Sport, and Daniel Trema, who at present time helps Mecachrome project firm prepare for the series GP2. 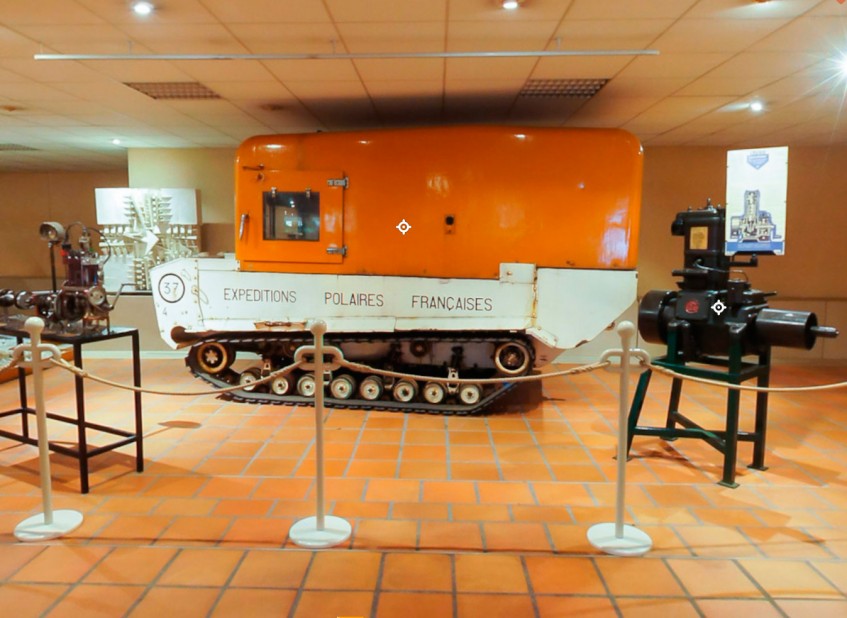 M29 Weasel is a ratrack, built by Studebaker automobile company at its factory in the town of South-Bend, in Indiana (the USA). The production lasted from the summer of 1943 till the summer of 1945 altogether there were made approximately 15, 000 copies. Some of these automobiles finished their career in Polar expeditions of the USA, Australia and France. They were used in French Polar expeditions since the late 1940ies till the early 1990ies, in both Arctic (Greenland) and Antarctic (Terre Adélie), particularly the version M29C. They served as a model to inspire the creation of a French upgrade version HB 40, which was called Castor and cut into operation in 1967. 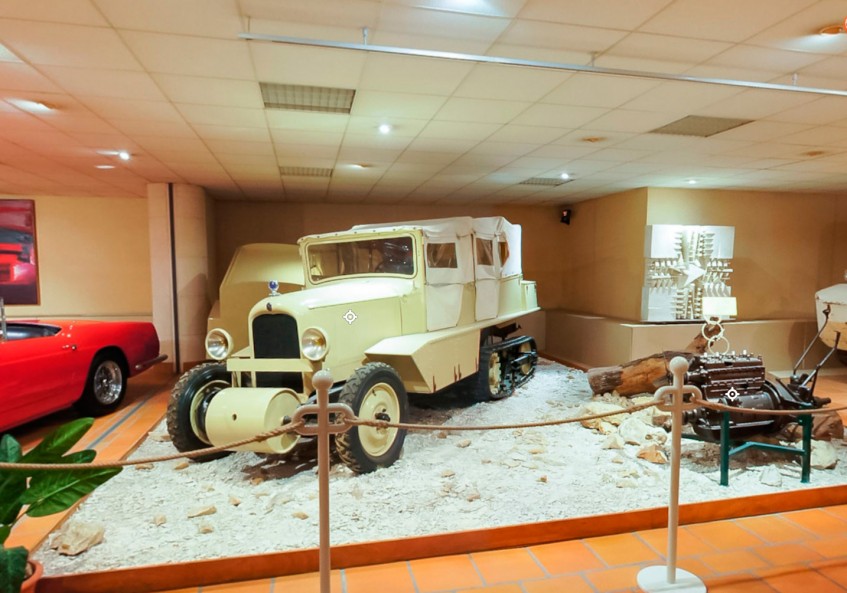 - Continuing the topic of “expedition cars”, the Citroen AC4 Kegresse 1929 stationed itself on the separate extemporaneous stand.
It is not an original Citroen AC4 Kegresse . This is a car from the TV series "La cloche tibetaine" 1973 . (Tibetan Bell) . This series is about the history of “Yellow Cruise”, the expedition, which was organized by Andre Citroen in 1931 and 1932 году in Central Asia, along the Silk Road, from Beirut to Bejing. 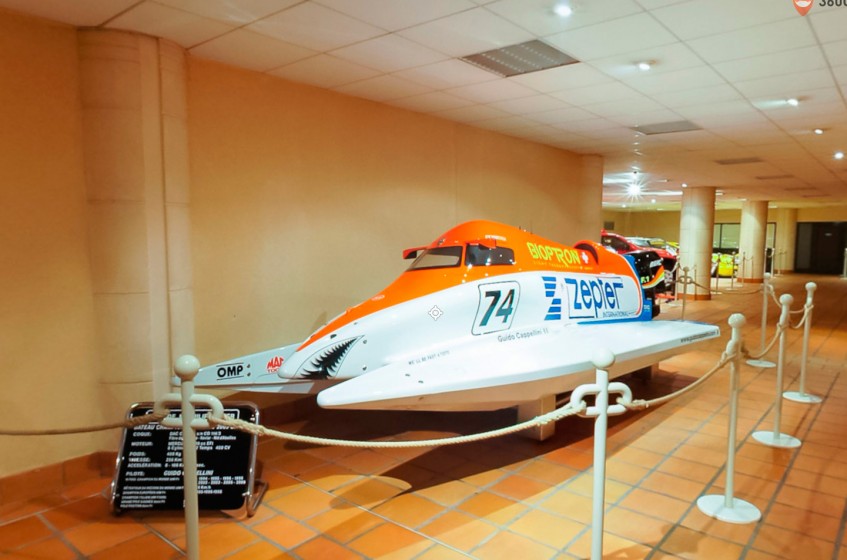 - Just having turned our head we immediately notice an unusual for automobile museums exhibit – it is a record craft F1 Powerboat - Don De M.Philip Zepter 2009.
This craft is the WORLD SHAMPIONSHIP 2009 UIM F1 , with the pilot Guido Capellini. It achieves the speed 256 km/h and reaches 100 km/h in as little as 3 seconds. 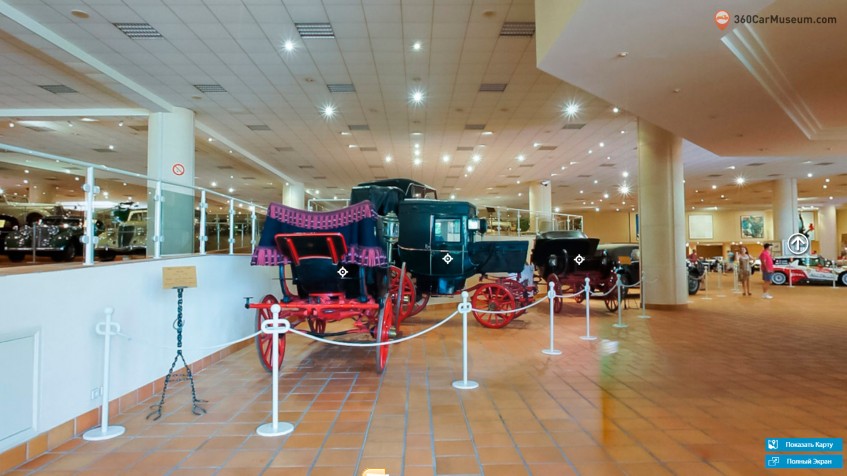 The collection of different horse-drawn carriages is located at the very ascending beginning to the second terrace of the museum. Here is the start of the historically oriented part of the whole collection. We begin together with the car history to step-up the stairs of the car development (in a literal sense 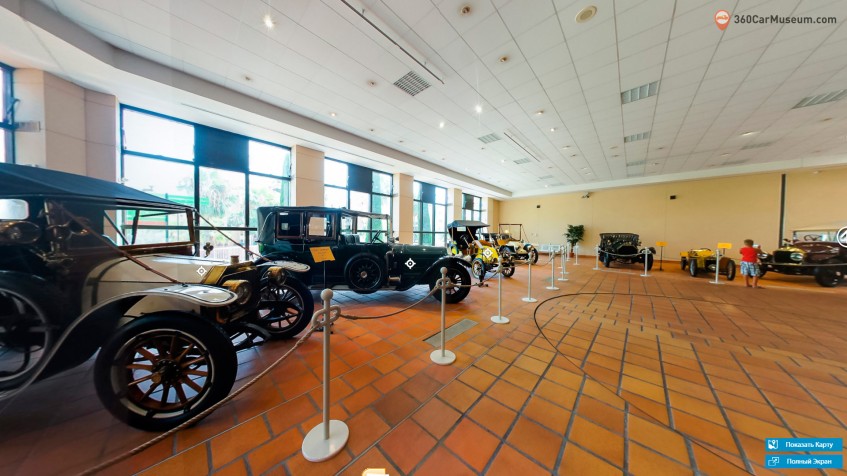 And the first step is the very beginning: the period from the early of the twentieth century till 1920ies.
The De Dion Bouton Type R of 1903 including the Renault KJ1 of 1923 are represented here.

The most interesting one in this time period is the Super Cyclecar of 1911, a unique French Super Cyclecar with a 2-cylinder engine survived to the present day one-of-a-kind.
This sports car Super Cyclecar had an impressive engine of 998cc displacement, but it produced only about 9.3 hp at the top speed 45mph / 70 km/h. 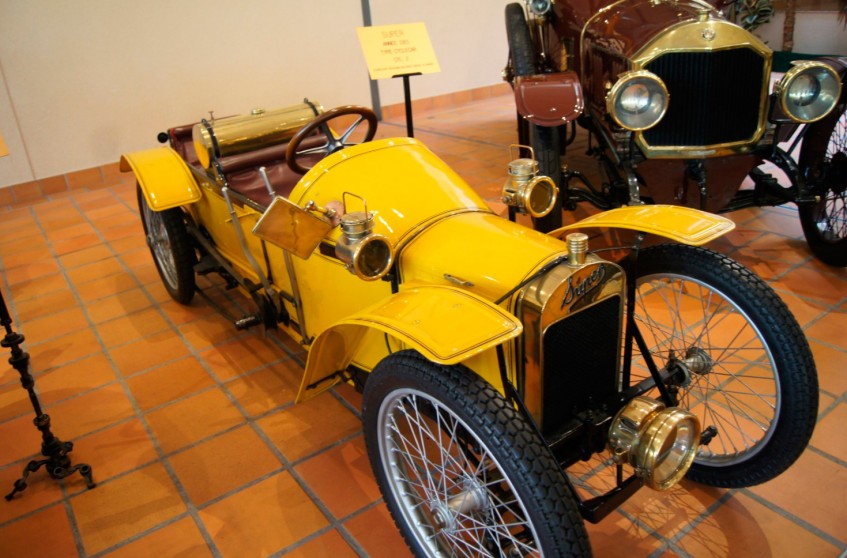 - and all is so brassy and interesting Bellanger Frères Type A1 1921
The French Bellanger Freres A1 was equipped with a 4-cylinder engine of the American firm Briscoe and a 3-speed mechanical gearbox. 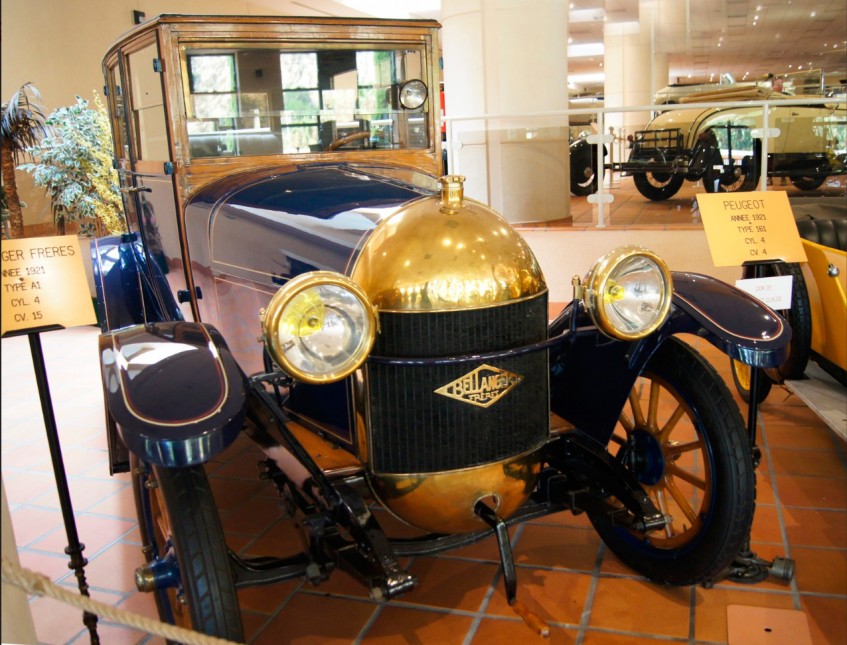 Let’s ascend one more step. The most glorious representatives of the 1930-ies are exhibited here. Those years were critical and transition in the general construction of the car – the body shapes became more harmonious and streamline, the wings were not so separate from the body, on the contrary they repeated the main bends and participated in an uniform appearance of the car. 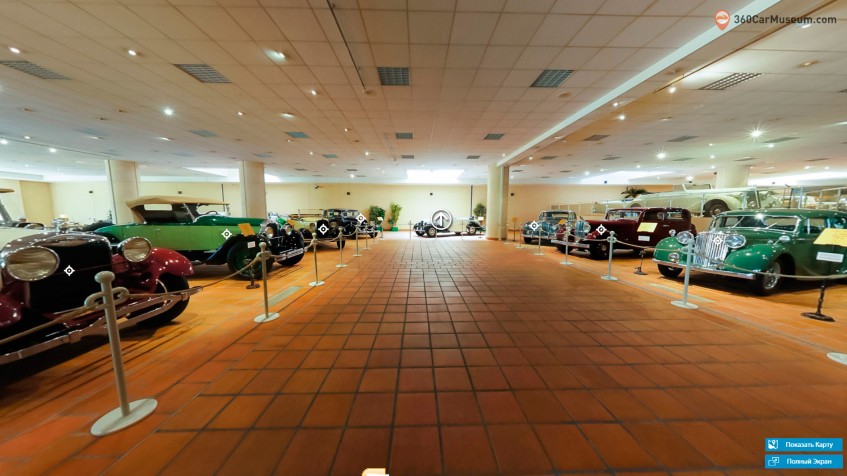 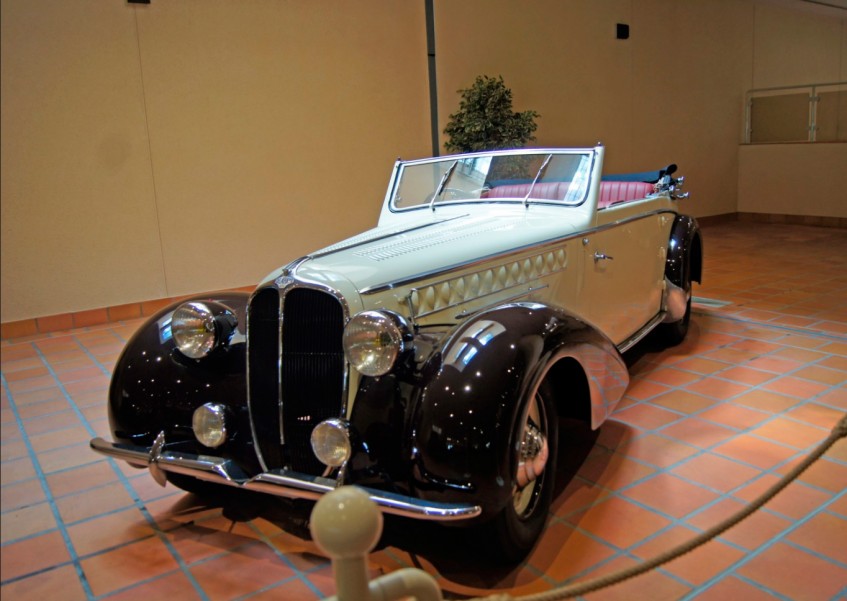 - Delahaye 135 MS Cabriolet 1947
It was designed by a young engineer Jean François. The car was produced from 1935 till 1954 with different bodies. The sport version Tourer was popular for races.
Delahaye 135, also famous as " Coupe des Alpes " was for the first time represented in 1935 after its success in the Alpine rally and marked the decision of the company Delahaye to build more sporty cars than it was earlier.
This is a sports version 135MS. It had the power 120-145hp, but the racing versions with the power more than 160hp were offered as well. The model 135MS could be seen at race events very often. The MS had a wheel base of 2.95 m, but the models for racing had shorter chasses - 2.70 m. The Ford V8 was a model of an automobile with an eight-cylinder V-shaped engine from the Ford, which was produced from 1932 till 1940.
The Ford V8 was offered totally with fourteen different body types. Two closed versions of the sedan car were called Tudor. They existed with three windows or five windows. This designation is used for a coupe, but without " Tudor ". A four-door closed version was called Fordor .

Let’s go up.
A smart Hispano-Suiza H6B of 1928 stands alone as some marking time. 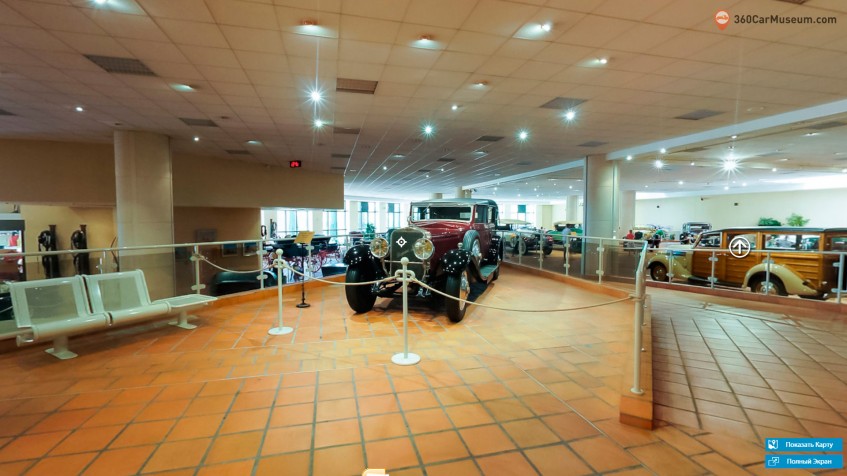 The engine of the model H6 – row, six-cylinder, developed by constructor Marc Birkigt, who was inspired by his work on aircraft engines. It was completely aluminum engine of 6,597сс (403 cubic inches). Except overhead camshaft, it was essentially a half of the aviation engine V12 by Birkigt construction.
One of the most remarkable peculiarities of the H6 was its brakes. They were alloy drums on all four wheels with a booster, which was for the first time in the field. Driving of the brakes booster was carried out by means of the special transmission shaft. When the car slowed down, its intrinsic impulse rotated a brake vacuum booster to provide additional effort. This technology was later licensed for other manufacturers, including the main competitor Rolls-Royce.

Further the stands of the cars of the 40-50-ies lie. Especially it is necessary to note a very rare and not famous to everybody brand, such as the Rosengart and two its exponents: - Rosengart LR4 N2 Cabriolet 1937 and Rosengart LR4 R1 1940.
Lucien Rosengart (1881 - 1976) was a talented engineer and businessman, who established a successful engineering business, when he was only 24 years old. In the middle of the 1920is he saw the opportunity to produce a very little car for the market segment in France that had not been occupied by the main players yet. Therefore he bought the license on manufacturing of the Austin 7 in 1923 and with the support of the engineer Jules Salomon he bought an old factory Bellanger in Neuilly. 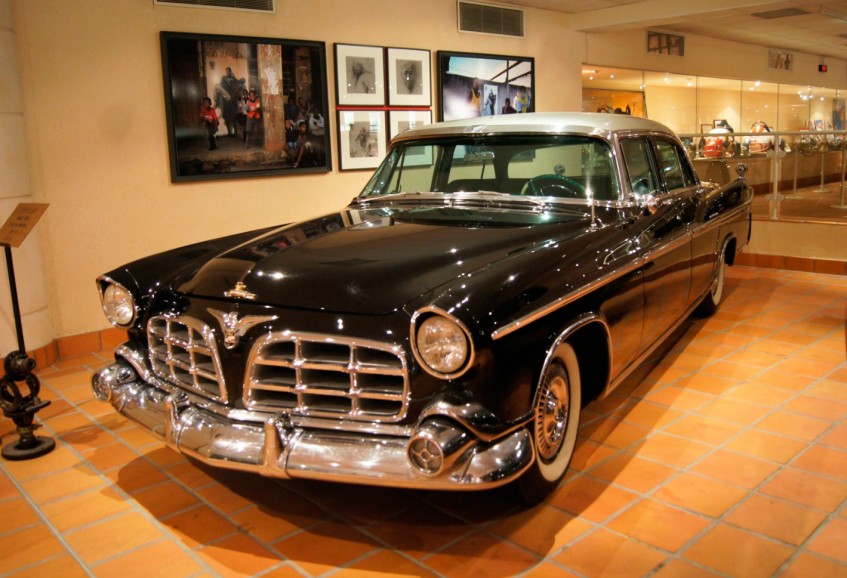 There is much chrome on the black body with numerous interesting body elements. It is a true American style of the 50-60es. 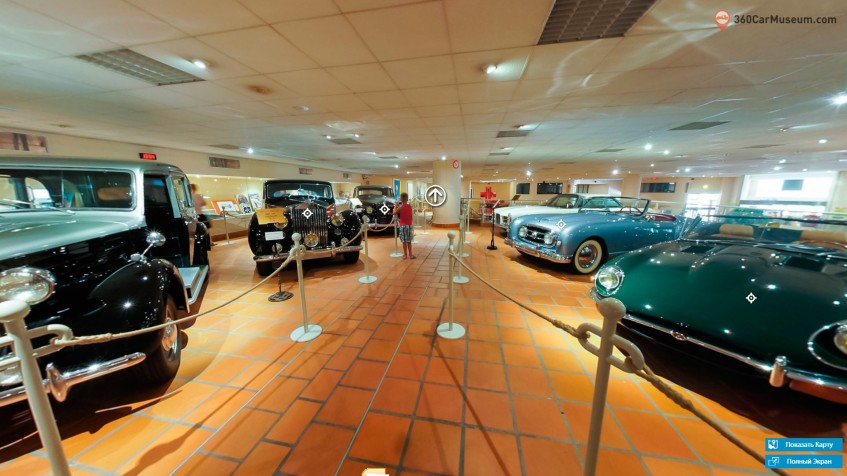 And at last “the peak of the whole collection” (according to the height it is a physics definition).
Here we see such exotica as: 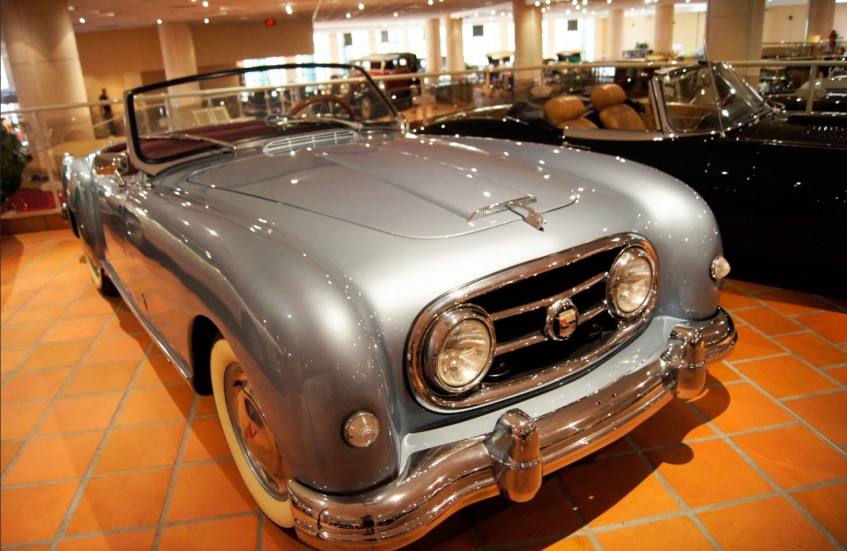 - Nash Healey 1952 .
Nash-Healey is a two-seat car, which was produced for American market during the period of 1951-1954 released by the firm Nash-Kelvinator Corporation Nash Ambassador transmission and European chasses and body. It served as a "halo" (or "image") automobile, or a flagship car for a manufacturer to promote the sales of the other Nash models. - Facel Vega Facel II (Type HK2) 1963
The Facel Vega "Facel II" was a French Grand Touring car produced by the Facel in 1962-1964.
By the year of 1962 Paris company Facel Vega was on the verge of bankruptcy. The Facel II had to be the last attempt of the company to build an executive-class car GT in French tradition. Jean Daninos the founder and the president of the Facel said about the Facel II, " the HK 500 was the most interesting automobile, which we had ever made, but the Facel II was much more better. It was absolutely stylish. 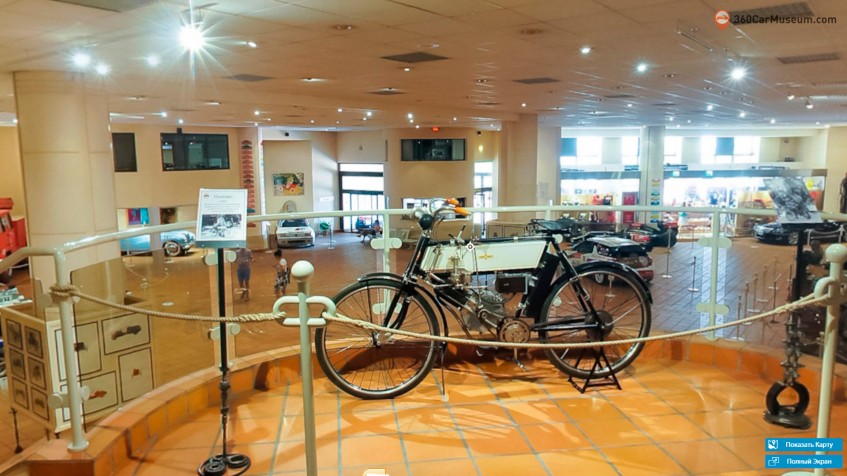 One of the oldest collection exhibit, the motorcycle Humber 1902 350 cc stands on the balcony in the highest point of the museum, observing everything and everybody from the height of its age.
This motorcycle of the English brand Humber with the engine of 350cс was used by the Prince of Monaco Albert 1 for his traveling in Monaco and France in 1902-1904.

There we will finish our small excursion around this entertaining museum and we invite you to visit out virtual tour and more carefully not in a hurry to examine every exhibit of the collection and read its history.