The automobile museum Bratislav Petkovic Collection is the newest in the range of technical museums in Serbia. The museum was founded by the Assembly of Belgrade city and Bratislav Petkovic, the collector and the owner of the collection, including historically valuable cars and an archival material on the domestic history of automobilism.
Bratislav Petkovic is a Serbian film director, playwright, theatre director and politician. He is a former Minister of Culture and Information of Republic of Serbia. 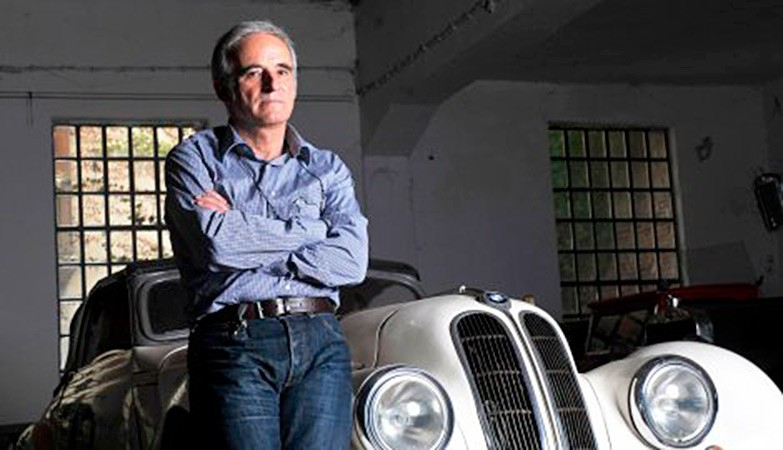 The premises of the museum are located in the building "Modern Garage", which is a distinctive monument to technical culture and it itself is declared to be cultural assets. The building designed by Russian architect Valery Stashevsky, was built in the center of the city in 1929 as the first public garage. The cars participants of the first international automobile and motorcycle race, taken place in Belgrade on 3 September, 1939 are housed in it. 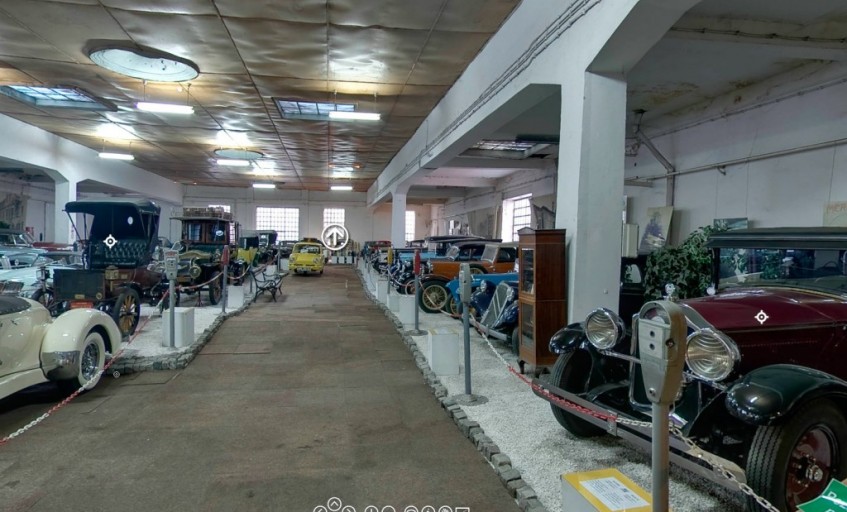 Besides fifty rare cars the collection contains different facilities, technical and scientific literature, driver licenses, the first traffic rules and laws, license numbers, tools, video and photo materials, pieces of art and objects of arts and crafts, contributing to increase of our knowledge about the history of the automobilism. 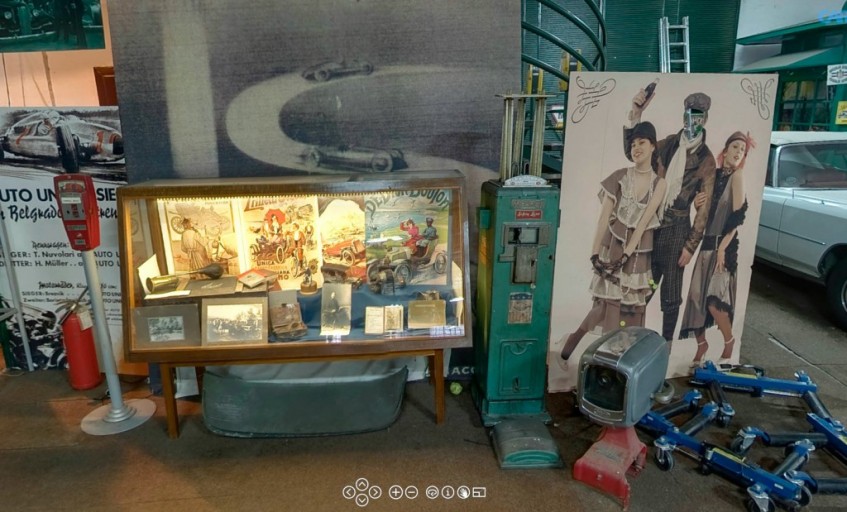 The oldest exhibit is a rare tricycle Маро Gardon of 1897. 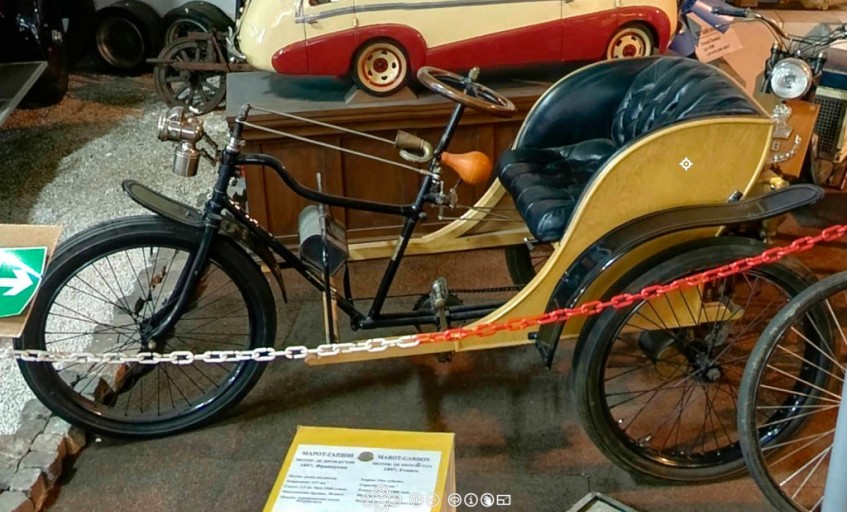 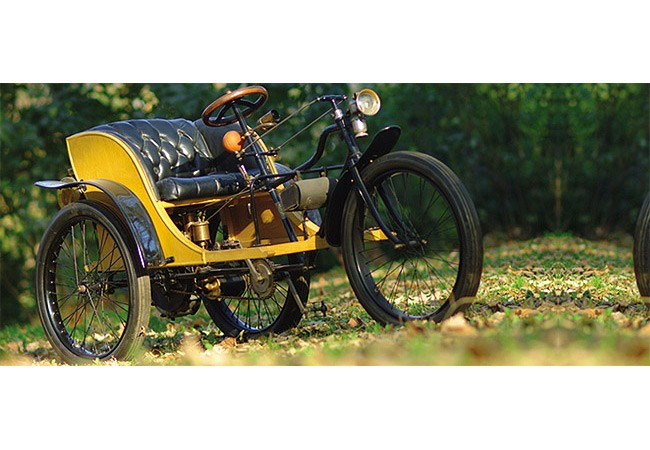 This tricycle has got a one-cylinder engine De Dion-Bouton of 137 cm3 and only 1.5 hp output at 1,500 rev/min at that the maximum developed speed reaches impressive for that time 30 km/h. The next in order of precession go two models:
- This is Ford Pilot Model of 1903, which is also the first automobile which appeared in the streets of Belgrade in 1903. 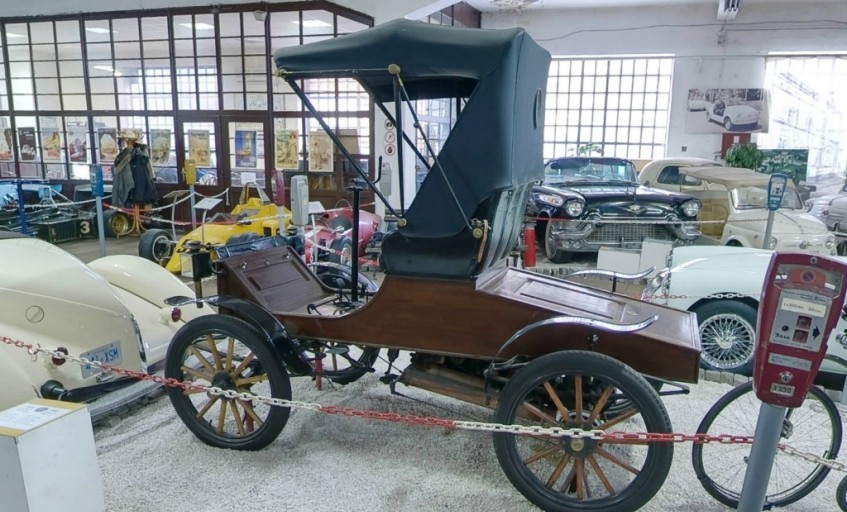 As a general matter, the history of this automobile appearing and its Serbian driver Sreten Costic is interesting in itself.
The first car arrived in Serbia by train on April, 3 in 1903

A small group of people greeted it on the platform of the railway station early in the morning. Boso Radulovic, the owner of this vehicle was there too. He was originally from a rich family, an officer and a wealthy merchant.
The first car in the streets of Belgrade was called "nesselsdorf" and it came from the factory which was near Vienna in the place with the similar name. Together with this powerful (according to the measures of that time) car a mechanic arrived, who stayed here to train the first Serbian driver. 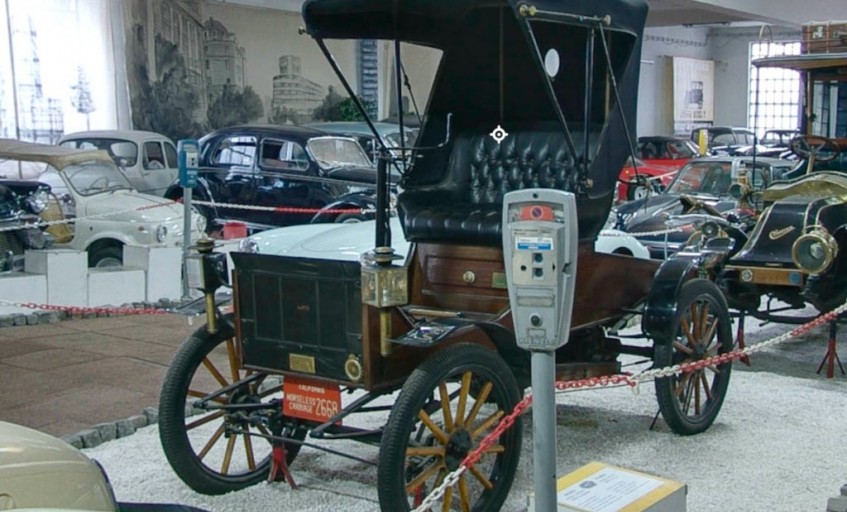 Though Bosa was an officer he did not have the heart to steer such a technological wonder, although he had seen the car in Vienna. He decided to hire a driver and chose Sreten Costic for this job, who was a photographer in Belgrade.
Why particularly a photographer? Well, the work of the photographer in those days demanded polished and accurate movements of the hands not to ruin photoplates. That is why the first owner of the Serbian car attached special importance to these qualities while driving the fast transportation device. The first owner Bosa Radulovic bankrupted several years later and his car was sold, it was noticed for the last time in 1912 in Skopje. Sreten Costic died in 1947 and was buried at the cemetery in Jajinci. "Hic Loco Situs the first Serbian driver Sreten Costic" is written on his monument.

The second item is of less famous French firm Charron of 1908 manufacturing year. 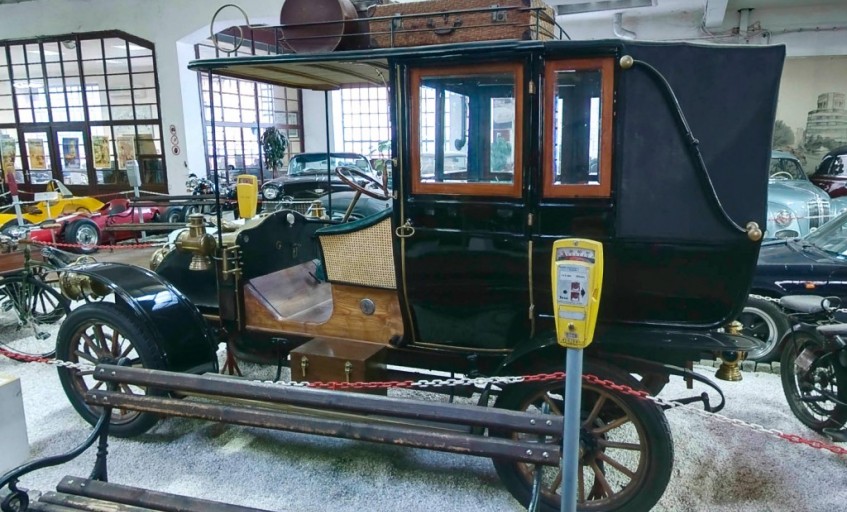 The construction of this model, as of many cars in that period of time has got much wood and brass, stylish cane seats, a coach-like back part of the body with a folded top and a pretty roof luggage compartment, filled with travel cases, valises and hatboxes. All in all it is entire “French transport vintage”. And as for an expressive grinning snake on the car’s fender ... I have already seen it somewhere. 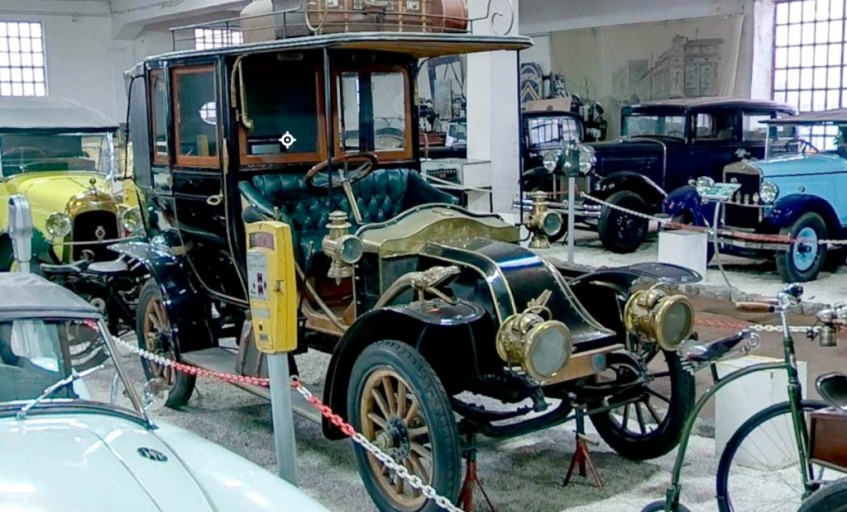 The firm Charron, Girardot et Voigt (since 1907 Charron) existed from 1901 till 1918 and specialized in passenger cars building. It is well-known for creating some armored vehicles having become ones of the first in the world.
The firm was set up in 1901 by three prominent at that times car-racers, who entitled their own company using their names - Charron, Girardot et Voigt. 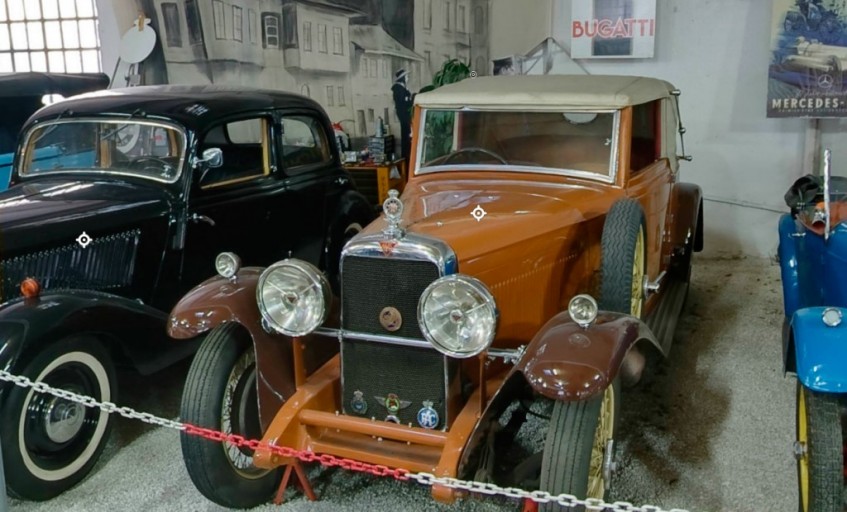 Alvis (Alvis Car and Engineering Company Ltd.) is a British automobile manufacturer from Coventry established in 1919. Except civil cars it produced aircraft engines and military hardware.
The automobile fitted with a 4-cylinder 1.5 l engine of 50 hp was able to achieve 120 km/h. Any more and it could most likely to get off the ground... after all there is no escaping from the “air genetics”. Unfamiliar for the cars of those days painting (when all automobiles were bad except black ones) and a good many of signs on the radiator grill as if they belonged to a trooper, showing how many parachute jumps he conducted. The light soft roof resembling aircraft fabric is logically provided with a round illuminator-like window of the rear view. 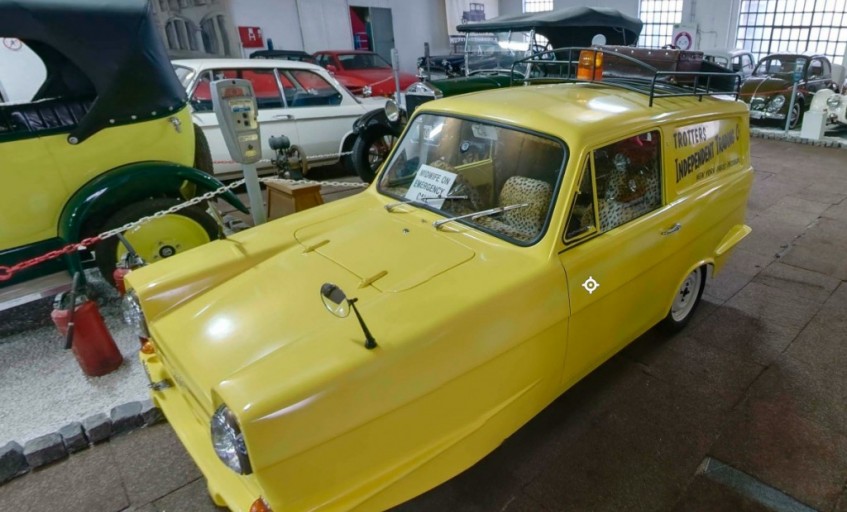 This is a marvel of British automobile industry and Reliant Motor company from the town of Tamuert, England. Since the car is three-wheeled it was regarded in Great Britain as a tricycle. Due to the light design and the weight of 700 kg the car could be used in Great Britain as a motorcycle. But a commercial version of the car with a side swinging back door which was displayed in the museum was sold as the Reliant Supervan. 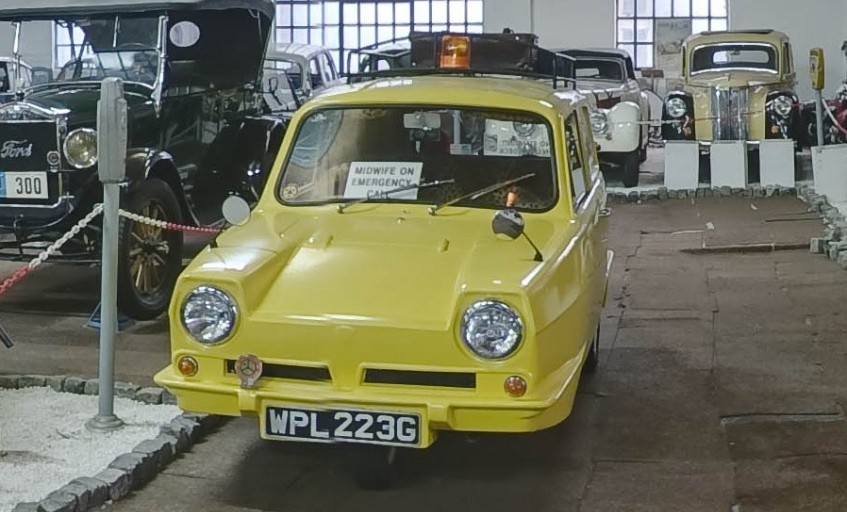 This small car is painted in the style of the cultic English serial - Only Fools and Horses.
It means “Fortune favors fools”. It was a British situation comedy contrived and filmed by John Sullivan. First it was shown on the channel BBC One from 1981 till 1991.
Two main characters of this serial were two brothers. They are market merchants of doubtful quality goods and have got unregistered company - Trotters Independent Traders (we can see this name on the van). They sell chiefly at the black market and naturally they do not pay taxes at all. There is a slovenly three-wheeled yellow van at their disposal. We just could not help but pay attention to it.

Further next to a smart (notably in all the times) Lancia Lambda of 1926 the Skoda 6R III of 1929 stands as if axed almost in "Rat-Rod" painting. 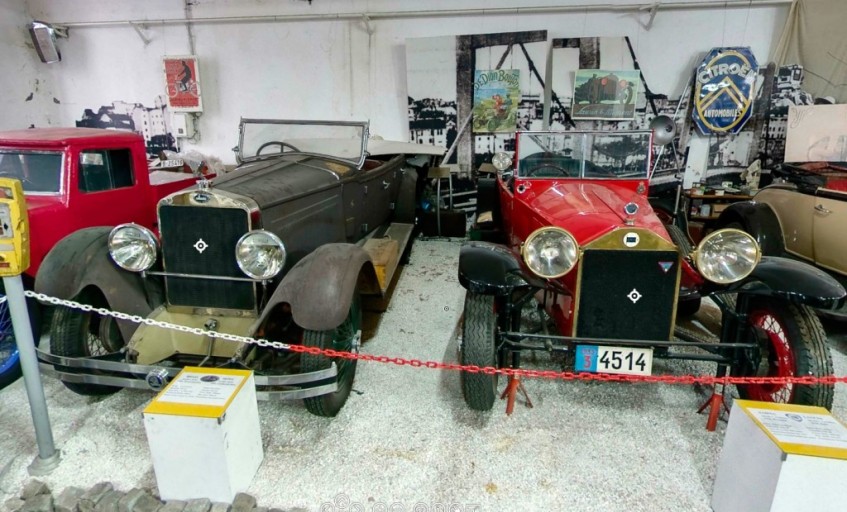 Turning back you gasp in amazement and admiration from a genies (even though it is hostile) of German military industry of World War II period. The Volkswagen 166 Schwimmwagen of 1943 is in front of you. 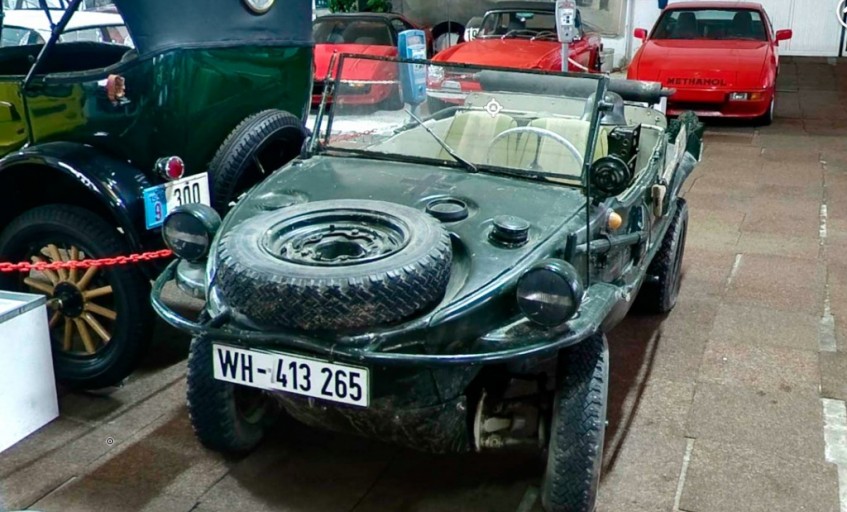 The Volkswagen Typ 166 (Schwimmwagen) is an amphibious four-wheel drive off-roadster designed for military applications, which was produced from the autumn of 1942 till the summer of 1944 for Wehrmacht and SS forces. More than 14,000 items of such cars were made. In order the automobile could reach land successfully, the engineers developed a front-wheel transmission (in the normal mode the Schwimmwagen and Volkswagen Käfer possessed rear wheel drive), operating together with low gearing. The 4-cylinder 25 hp engine accelerated the car till 80 km/h on land, and the top speed on water was equal to 12 km/h. But the paddles were always on board! You get surprised once again how Soviet soldiers could prevail over so technologically advanced nation! It is just inconceivable. 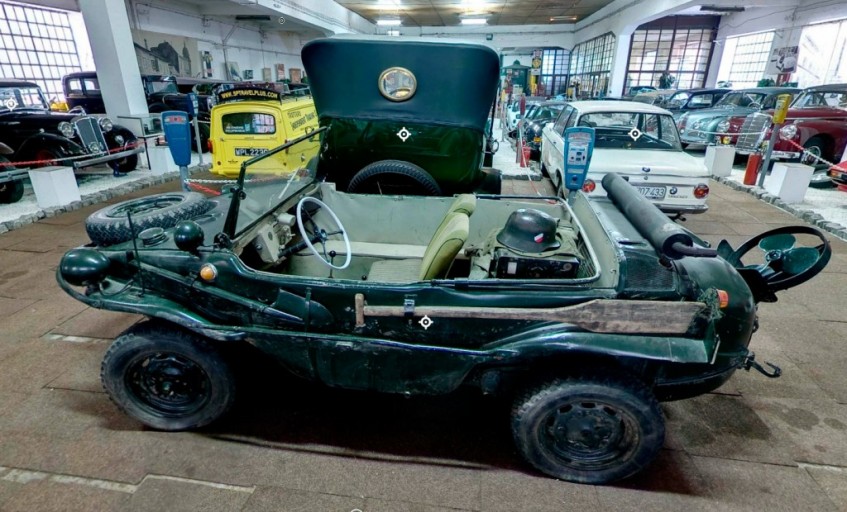 This red Porsche 924 of 1978 with a sign "Methanol" on the bonnet should be distinguished as one of the most interesting and unusual exhibits of the museum. 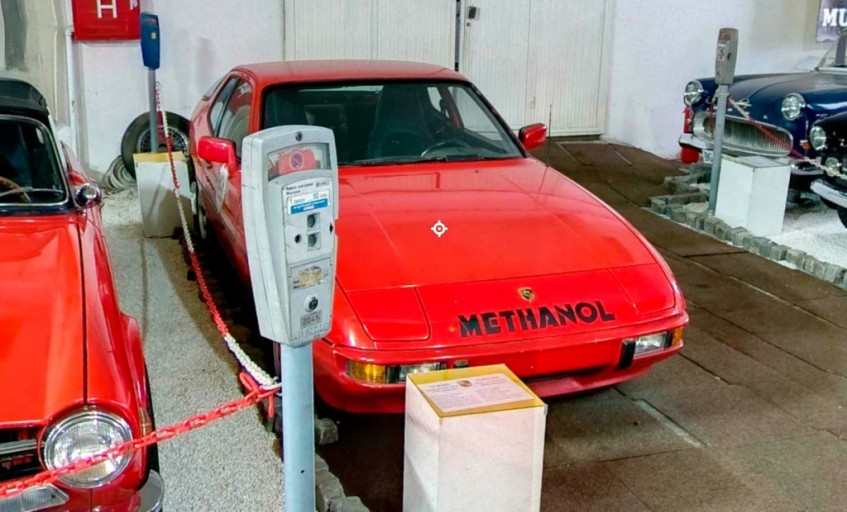 The only survived unit of the Porsche, which uses methanol, spirit procured from coal is kept in Belgrade automobile museum. Its designer Dr. Dušan Gruden was born in Belgrade and was working for 30 years at that well-known German plant as thehead of engines development. Touring the exhibition with interest we are gradually approaching two (so different) cars, which, though are connected with the most renowned person of former Yugoslavia – its President Josip Bros Tito.
He had many luxurious cars in his collection - it was modern in those days among the leaders of the states (let’s remember an impressive garage of our L. I. Brezhnev). One of these automobiles is a small, funny and, of course, white Fiat 500 Chia-Jolly of 1961 manufacturing year.
The second is an imposing and executive-class car, naturally, black Cadillac Eldorado de Ville of 1957.
The museum "Fiat" of "nova 500 - jolly" model was used from 1964 till the early 70-ies to transport Tito around Belgrade Fair. In order Toto could sit comfortably in this small car, the front seats were removed from the passenger’s side. One more identical Fiat accompanied it. The museum copy is a present of Belgrade Fair after the exhibition "100 years of an automobile in Serbia" took place in 2003. The Fair wished to requite the museum for help in the Fair realization and the only thing, which Petcovic asked was the Fiat of Tito. And this high-power of 300 hp Cadillac Eldorado de Ville was employed by the President in official trips and parades. Well, we are finishing a short review of Belgrade automobile museum with such “a bright spot” standing in the rearguard of the whole exhibition – a chic cabriolet Auburn 851 Speedster of 1935. The Auburn Speedster was an American car produced at Auburn Automobile Company from Auburn, Indiana state. The Auburn 851 Speedster of 1935 was the most distinguished model of stylist Gordon Buehrig, who was famous for his car Cord Model 810. 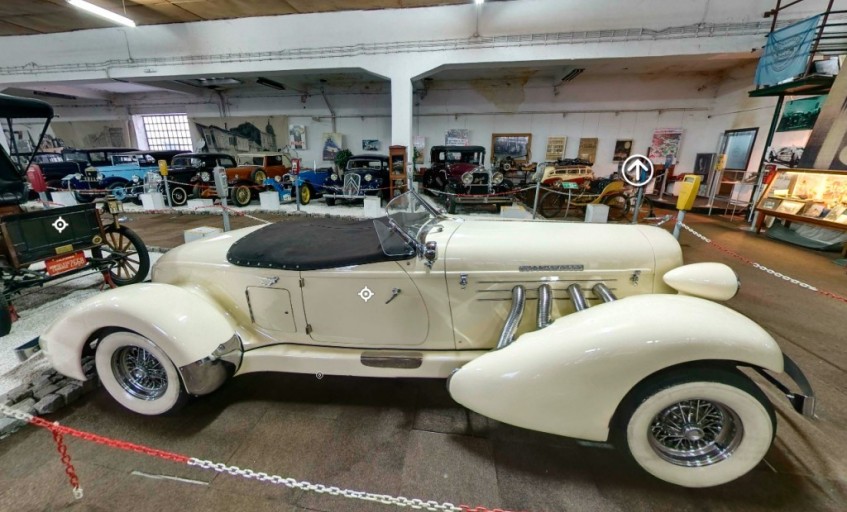 Every collector just desires to obtain for his collection this paragon of extravagant stream-line design, in which you can feel power, style, wealth and beauty simultaneously. It is rather a rare combination for any object, phenomenon or idea. Let’s call this automobile “quintessence of pure designer’s thought”. Sure enough, it is not far from the truth. There is much interesting and educational in Bratislav Petkovic Collection. We invite those who is not able to enjoy the exhibits in Belgrade in person and who wants to learn more to make a virtual tour from the page of this museum on 360carmuseum - 360carmuseum.com