ru.wikipedia.org
The Ford Model A of 1927 is an automobile, produced by the Ford Motor Company since 1927 until 1931. This is the second model with the index A in the history of Ford Motor.
The first Ford A was produced on October 20, 1927, but not sold until December 2. It replaced the venerable Model T, which had been produced for 18 years.
The Model A came in a wide variety of styles: Coupe (Standard and Deluxe), Business Coupe, Sport Coupe, Roadster Coupe (Standard and Deluxe), Convertible Cabriolet, Convertible Sedan, Phaeton (Standard and Deluxe), Tudor Sedan (Standard and Deluxe), Town Car, Fordor (2-window) (Standard and Deluxe), Fordor (3-window) (Standard and Deluxe), Victoria, Station Wagon, Taxicab, Truck, and Commercial.
The engine was a water-cooled L-head 4-cylinder with a displacement of 3,28l. This engine provided 40 hp (30 kW; 41 PS). The Model A was the first Ford to use the standard set of driver controls with conventional clutch and brake pedals; throttle and gearshift as compared with the previous Ford models.
The Model A's fuel tank was located in the cowl, between the engine compartment's fire wall and the dash panel. It had a visual fuel gauge, and the fuel flowed to the carburetor by gravity.
Model A was the first car to have safety glass in the windshield.The Model A had 4-wheel mechanical drum brakes. The 1930 and 1931 editions came with stainless steel radiator cowling and headlamp housings.
The Model A was produced through 1931. When production ended in March, 1932, there were 4,849,340 Models A, made in all styles. Its successor was the Model B.
The Soviet company GAZ, which started as a cooperation between Ford and the Soviet Union, made a licensed version of the Model A from 1932-1936, which called GAZ-A. 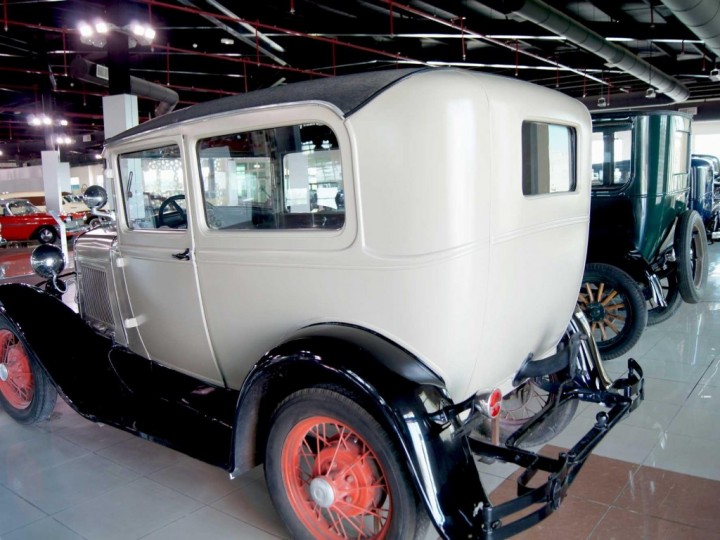 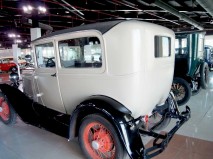 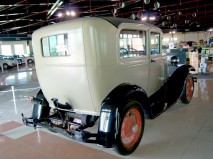 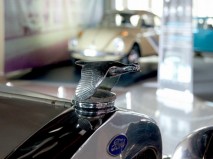